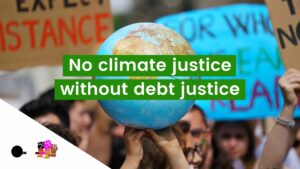 The climate crisis and the COVID-19 pandemic are adding to the debt burdens of countries in the global South.

Many countries need to transition away from use of fossil fuels, as well as to mitigate or prevent damage from severe storms, fires, and floods. Effects of climate change have tended to be hardest on countries that contributed very little to its causes.

At the same time, the pandemic, with its impact on health budgets, jobs and tax revenue, has worsened a debt crisis that never really went away despite strong mobilization for debt cancellation—the global Jubilee campaigns that Canadian churches joined more than two decades ago.

Debt cancellation is needed now to fight the climate crisis and the pandemic. This month, KAIROS and many of its partners are joining in Global Days of Action for Justice and Debt Cancellation from Oct. 14 to 30. The period includes meetings of the International Monetary Fund and the G20 summit, along with celebrations of World Food Day (Oct. 16) and the Global Climate Strike (Oct. 20). It ends just as the next global climate conference (COP26) is set to begin in Glasgow.

Last year, more than 500 organizations, networks and movements worldwide came together to demand debt cancellation in the face of the pandemic and the multiple crises of health, livelihoods and climate change.

But the response of governments, international financial institutions and lenders is still not sufficient: it’s short-term and limited to a handful of countries. Analysis from several of the lead “Days of Action” organizations shows that countries in the global South spent $372 billion on servicing debt in 2020. Their briefing paper explores the links between debt and the climate emergency and demonstrates the importance of addressing unsustainable debt in the global South for achieving climate justice.

Unfortunately, governments are playing catch-up with regard to climate finance. Commitments made by the richest countries at the Paris climate conference in 2015, to aid low income countries to speed up their transition away from fossil fuels, have not been met. In the weeks since Canada’s federal election,  Environment Minister Jonathan Wilkinson has been leading efforts to get the wealthier countries to commit to a US$100-billion fund in annual climate financing for developing countries.

But that won’t be enough, say the civil society organizations working on climate finance issues. Instead, they are calling for at least US$400 billion per year, to be provided in the form of grants and including a separate mechanism for funding loss and damage, so that debt levels do not increase.

For years, KAIROS and partners  have recognized  ecological debt which  is effectively the debt owed by rich countries to the global South because of environmental damage and loss resulting from extraction and harmful development.  Climate justice also include a series of measures to redress the North-South imbalances of extraction, consumption, and waste.

Major international financial institutions have accepted the link between debt and the climate crisis, but urgent action is needed.

“The global North’s over-appropriation of the Earth’s carbon absorption capacity has built up an enormous ecological debt to the peoples of the global South and to all living beings in the Earth community,” wrote past KAIROS staff members Jim Davis and John Dillon in 2011. “We must cancel developing countries’ unsustainable debts without imposing new conditions.”

The call is all the more critical a decade later and will be reinforced during the weeks and months ahead, beginning with a major global civil society statement on climate and debt, which KAIROS Canada has signed onto. The statement launched on October 13, the International Day for Disaster Reduction.

Closer to home, members of For the Love of Creation are calling on Canada to commit to international climate financing; reduce greenhouse gas emissions by 60 per cent below 2005 levels by 2030; invest in just transitions for workers and communities; and to honour the rights of Indigenous Peoples by recognizing and enacting the right to free, prior, and informed consent and incorporating Indigenous knowledge and experience into any proposed policy and program.