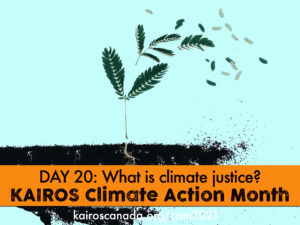 What is climate justice?

Today we enter week 4 of Climate Action Month and focus our attention on global climate justice. This week, KAIROS will look at elements of global climate justice in more detail, including resource extraction, food security, climate adaptation, migration, and more. We’ll share work from global partners and prepare for the Global Climate Strike on Friday.

We start this week by reviewing what we mean by climate justice. Yesterday we shared a briefing paper from the KAIROS archives that explored the injustice of climate change impacts worldwide. It includes a key concept in defining climate justice: The peoples of the Global South, who bear the heaviest burden of climate change, have done the least to cause it. We encourage you to look at that post, which situates this injustice in a discussion of ecological debt.

“Climate justice has nothing to do with talking about degrees of temperature or 350 parts per million, which are figures and numbers that mean nothing to most people.“

“For us, climate justice…has to do for example with…recognizing the ecological debt that the industrialized countries of the north have with the peoples and countries of the south, to recognize the climate debt that oil companies like Texaco, Chevron, Exxon Mobil, even Inca, which is a Canadian company, have. This climate justice has a lot to do, for example, with stopping the causes of climate change. If we want to talk about justice, we have to say what the causes are, therefore we are going to confront them, that is, for example, to start leaving oil, coal gas, tar sands in the subsoil.”

“Climate justice also has to do with repairing the damages caused – not only repairing the countries and peoples of the South for the impacts of climate disasters but also repairing the territories of the peoples where oil, coal, and gas are extracted, or where false solutions like REDD+ have been implemented.”

Watch the recording to hear more from this discussion. Please note that Ivonne’s and Mirian’s responses are in Spanish only.