Centering Black, Indigenous, women of colour in a post-pandemic recovery 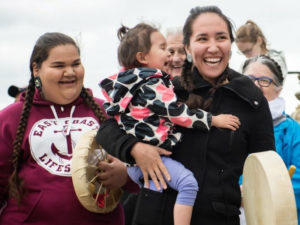 It was a year ago, on June 3, when Canada received the final report of the National Inquiry into Missing and Murdered Indigenous Women and Girls, which delivered 231 individual calls for justice to governments, institutions and Canadians, based on testimony from thousands of families, survivors and Knowledge Keepers.

The federal government anticipated delivering its national action plan in response to the report this month, but that unveiling has been postponed indefinitely due to COVID-19 priorities.

As if the disappearances and deaths of Indigenous women are not urgent.

As if COVID-19 does not highlight the pressing need for a national action plan to address the impacts of systemic racism — an offspring of colonization — that has marginalized Black, Indigenous, people of colour — particularly women and 2SLGBTQQIA people — for hundreds of years.

This racism and its ensuing inequities are manifested not only in the high ratio of deaths and disappearances among Black, Indigenous, women of colour and 2SLGBTQQIA people, but in their health and wellbeing too.

One can only hope that the federal government’s delay in delivering its response to the MMIWG report is due to a recalibration effort that will infuse it into its pandemic recovery strategy.

Afro-Indigenous, Indigenous women, women of colour, and 2SLGBTQQIA people have struggled far too long for the bare basics such as securing a stable income, finding affordable housing, eating well, leaving abusive homes, receiving adequate support and resources for their children, and losing their children to government agencies.

Ideas for a pandemic recovery resemble pre-pandemic plans to help Indigenous women and other marginalized communities: universal basic income, permanent remote work options, food to eat, resources to pay bills, and the ability to choose to educate children on the land and to live without violence or fear.

I can only hope the government is fusing its MMIWG and recovery plans because COVID-19 has applied tremendous pressure on those already at risk — whether in trying to make ends meet or defending body and land from attack.

Since March, women, including land and water defenders, have been under increased attack in Canada and the Global South. For them, home is far from a place of refuge. It is ground zero for assault and murder — whether at the hands of an intimate partner or those who wish to silence them.

I want to hope the federal government has our back, but its actions and those of the RCMP leave considerable room for doubt.

In late April, for example, four men used vehicles to attack the Tiny House Warriors’ encampment area. Despite photos of two of the attackers on social media the RCMP have made no arrests.

Meanwhile, at a time when the federal government is opening its coffers to help people during the pandemic, ’60s Scoop survivors — those Indigenous peoples removed from their families as children — wondered why the pandemic delayed their settlement payments. Finally, on June 1, the government approved interim payments of $21,000 to those eligible.

While deeply frustrated, Indigenous women and communities are far from victims. Worldwide they have increasingly taken up space, a slow and overdue move towards restoring what once was. Whether at the grassroots level, on social media, or in communities, Black Indigenous, First Nations, Inuit and Métis women are on the frontlines advocating for healthy environments and communities, bridging gaps of education, providing community support, and leading and earning in business, fashion, health and wellness.

This month, KAIROS is spotlighting some of these women who are working to make change in Canada, including women land defenders who will come together to launch the Canadian phase of an online portal, Mother Earth and Resource Extraction: Women Defending Land and Water (MERE Hub), designed to empower them through resource and knowledge sharing.

Their voices, and those of other Indigenous women and marginalized communities during the post-pandemic recovery, are imperative. We cannot move towards strong, safe and resilient societies, and true reconciliation, if we continuously and systematically undervalue Black, Indigenous, women, 2SLGBTQQIA people of colour, and other racialized communities, and deny them a seat at the table.

When governments stop endangering Indigenous women, children and others by ending investments and actions that oppose their direct interests and wellbeing, when they comply with the calls from the Truth and Reconciliation Commission of Canada and the MMIWG report, when the federal government finally fulfills its promise to implement the United Nations Declaration on the Rights of Indigenous Peoples, it will finally set in motion the cumulative, radical action we all wish to see.

Originally published on Rabble on June 11, 2020

Chrystal Waban is the Indigenous Rights Coordinator at KAIROS Canada and a passionate Omàmiwininì Seedkeeper at Wananoshka Mashkiki and founder of Blackbird Medicines.