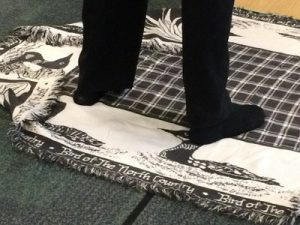 The report issued by Canada’s Truth and Reconciliation Commission in June 2015 on abuse of aboriginal children in church-run residential schools included a call for non-aboriginal Canadians to learn about the impact of European settlers and their descendants on the country’s indigenous peoples. Church people have taken that call seriously.

An historical simulation called the Blanket Exercise is proving to be one of the most popular and effective learning experiences. The Canadian ecumenical advocacy network, KAIROS, developed the exercise 20 years ago. KAIROS programme coordinator, Ed Bianchi, reports that since the commission issued its calls to action, demand for Blanket Exercise workshops has nearly tripled.

The exercise explores how the country’s original inhabitants went from being in cooperative relationships with settlers to losing their land, rights and culture as settlers and successive governments ignored the intent of treaties, and used them to take land. Participants are asked to assume the roles of indigenous peoples and roam across a space covered with blankets – representing the land – while listening to the story of the impact on the country’s indigenous peoples of European settlements, laws and attitudes. Gradually the blankets are rolled up and participants removed until the survivors are left crowded onto small, rumpled and disconnected blankets.

Sara Stratton, an advocate for indigenous rights working with The United Church of Canada, says the point of the experience is to make the loss of indigenous land and rights visible by engaging participants in a process of active learning.

The exercise has attracted international attention. Bianchi reports that some KAIROS member churches, including the Christian Reformed Church in North America, the Mennonites, and the Quakers are using adaptations of the exercise in the United States. KAIROS has also received inquiries about the exercise from groups in Australia and New Zealand. Bianchi notes that KAIROS is currently working with youth in Guatemala on an adaptation that is specific to the relationship between indigenous and non-indigenous people in that country. Plans are to have the model ready to be pilot tested in autumn 2017.

“Where were the Christians?”

Recently Stratton guided a group in Toronto through the Blanket Exercise. At the conclusion of the simulation, the participants from two United Church of Canada congregations and an independent community church engaged in a talking circle led by indigenous elder Bob Phillips where each participant spoke in turn. All admitted they had been shaken by the experience. Many spoke through tears.

Phillips points out that although the Blanket Exercise addresses history, it also points to current issues in Canada such as the high percentage of indigenous children in foster care. Seven percent of Canada’s children aged 14 and under are aboriginal but aboriginal children make up 48 percent of all children in foster care. In part, this is a legacy of residential schools that left many adults traumatized and unable to care for their children. But in part, it is due to European judgement of what is appropriate childcare, the same argument once used to justify placing children in residential schools.

From amidst the tears of shame and repentance shed during discussion following the Blanket Exercise, a voice said: “My prayer is that our broken-heartedness won’t heal too quickly.” Another added: “We must act.” And that, says Stratton, is the purpose of the exercise. It is what the churches are being called to do by the Truth and Reconciliation Commission.

More information about the Blanket Exercise

Originally published on the World Council of Churches website on March 30, 2017 by Kristine Greenaway
Filed in: Indigenous Rights