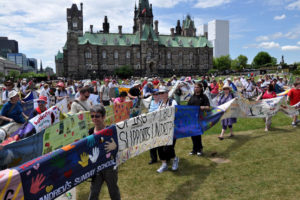 A bill which would harmonize Canadian law with the United Nations Declaration on the Rights of Indigenous Peoples (UNDRIP) would need to restart its life in the House of Commons—after the federal election—if not passed by the senate before June 21, advocates say.

KAIROS Canada, an ecumenical justice organization of which the Anglican Church of Canada is a member, is urging the senate to pass Bill C-262 before Parliament is scheduled to break for the summer, at which point the bill would die on the order paper and would have to be reintroduced in the fall.

The bill, which was introduced by NDP Member of Parliament Roméo Saganash in 2016, is up for its third reading in the senate.

KAIROS, which is made up of 10 member groups including the Anglican Church of Canada and the Primate’s World Relief and Development Fund, has been advocating for the bill through a letter-writing campaign in collaboration with other faith groups.

“Throughout this whole process of it passing through the different levels of readings in the senate, we’ve encouraged our constituents to write letters, send emails, make phone calls,” says Ed Bianchi, KAIROS program manager. “Even now as it’s entering into the third reading stage, we’re being encouraged by people closer to the action to continue this kind of advocacy because it seems to be having an effect. It’s getting the attention of the senators.”

KAIROS also produced a short video on the topic, which features National Indigenous Anglican Bishop Mark MacDonald, National Bishop of the Evangelical Lutheran Church in Canada Susan Johnson and activist and Associate Professor at the University of Waterloo Beverly Jacobs.

The bill is “the beginning step of Canada becoming what has always said it dreams of being,” says MacDonald in the video.

“I think that Bill C-262 would not only redress the wrongs of the past, but it promises Canada to be built on a firm foundation of justice, equity and the rule of law,” MacDonald told the Anglican Journal in an interview. “So these are things that we always say that we believe in and are committed to, but Bill C-262 is about making this a reality for all Canadians.”

The bill is a “rare” opportunity, MacDonald says, “to do two things at the same time: one, to address historical wrongs, and at the same time, create a better future. The two of them aren’t always so wonderfully paired together.”

UNDRIP was adopted by the UN General Assembly in 2007. (Canada endorsed the document in 2010.) It is “the most comprehensive international instrument on the rights of Indigenous peoples,” according to the UN.

The declaration “establishes a universal framework of minimum standards for the survival, dignity and well-being” of Indigenous peoples.

The bill was endorsed by the Assembly of First Nations, which called adopting Bill C-262 “a necessary act of reconciliation.”

While the bill passed by a majority through the House of Commons May 30, it was not supported by Conservative MPs. Conservative members of the senate have voiced objections to the bill and are expected to attempt to delay it by adding amendments.

Conservative Senator Donald Plett told the senate in May that there were “significant unanswered questions over the impact of this bill, not because of a lack of support for the aspirations of UNDRIP but because of the lack of clarity and agreement on what its implementation could mean to Canada,” APTN reported.

The senator also highlighted the principle of free, prior and informed consent, which appears in several articles in UNDRIP, questioning whether consent would amount to the ability for Indigenous groups to “veto” development projects.

These objections represent a misunderstanding of what passing the bill will actually mean, says Bianchi. “First of all, there’s the mistaken opinion that the law will mean that the declaration immediately becomes Canadian law, and that’s not correct,” he says. The bill, he says, acts as more of a “framework.”

Regarding concerns around free, prior and informed consent, Bianchi says, “opponents of the bill continue to, I think, propagate the misconception, the misunderstanding, that this is all about veto power, when in fact this is not the case. I think this is something that’s been explained over and over again, but it’s a very persistent position that the Conservatives are using now in an attempt to filibuster.” The word “veto” does not appear in the declaration, he says.

“And in fact, free, prior and informed consent isn’t so much the right to say no as the right to be able to engage in a process towards an agreement which is mutually acceptable, which has been arrived at in a fair way.”

While consent may be the most headline-grabbing aspect of the bill, MacDonald believes its greatest impact would be on long-term improvements in areas like the environment, crime, poverty, discrimination, “and the well-being of First Nations people.”

KAIROS has been advocating for the rights laid out in UNDRIP for a long time, says Bianchi, noting that the organization was involved in advocating the adoption of the declaration by the UN. In 2011, KAIROS led a march through Ottawa, where more than 400 banners decorated with statements of support for the declaration were carried by a chain of people.

Bianchi says it has been “really encouraging” to see the response of churches and Christian communities to Bill C-262. “I think [it] demonstrates the overall effect of our ongoing education work, because people won’t get involved if they don’t understand the issue. I think the fact that they are getting involved speaks a little bit to the efforts that have been put in over the years to sort of raise awareness and understanding of these general issues,” he says.

If the bill should pass, “not only will that be a positive moment for the legislation and, I think, relationships between Indigenous and non-Indigenous people in this country, but it will also reinforce the idea that this kind of education and advocacy work can be effective,” he adds.

“Now of course, we haven’t reached the end of the story yet, and we might still unfortunately see the bill die on the order paper. But no one will be able to say we didn’t try.”

This article was written by Joelle Kidd and published in the Anglican Journal on June 06.