Spirited Reflection: Social Justice in the 500th anniversary of the Reformation 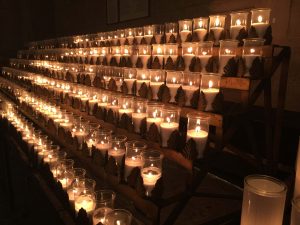 In 2017, Lutherans worldwide are commemorating the 500th anniversary of the Reformation spearheaded by Martin Luther in 1517. With the assistance of the printing press, Martin Luther’s 95 Theses became the historical document to spark changes in the church.

Luther rejected the practice of selling indulgences for as a church fundraiser. Luther stood against selling liberation from purgatory for the faithful. He took the Scriptures from the hands of church elites and translated the Word of God into the language of the common people. The Reformation upturned the hierarchical and exploitative institution of the church and revealed a manifestation of God’s grace in the form of liberation and justice. I believe that for at the heart of the Reformation is to establish justice; justice for the vulnerable, the marginalized, the silenced, the invisible.

The 95 Theses initiated a rethinking and re-formulation on the understanding and theology of salvation. Luther, in his own encounter with God’s grace, realized that grace is the central pillar in God’s salvific plan for all creation. Grace equalizes the playing field because we all need grace. The poor and the poor in spirit both require grace to mend our departure from righteousness. The proud and the humble are equally in need of grace to truly see one another as bearers of God’s image. God’s grace liberates us from our bondages of anxieties, worries, hidden secrets, and hardened hearts. It is in this liberation that true freedom will prevail.

I remember a story about justice and fairness. Three people of different heights went to pick fruits from a tree. Seeing the more vertically challenged persons could not reach the better fruits at the top, the tallest one offered the following suggestion: “In all fairness, I will provide you both with a stool so you may reach the taller fruits just as I can.” At this point, the shortest person commented: “In fairness and with the stools, you are still having an advantage above us. In the spirit of justice, we should have stools so that we are all at the same height and having equal access to the best fruits.”

This story made me realized that to work for social justice is not about trying to advocate for equal treatment, but to establish circumstances and conditions so that we can stand at the same height. Social justice is seeking to equalize of circumstances so that all will have access to life’s necessities. Seeking justice is to stand against practices where the strong become stronger, and the weak and vulnerable are silenced and made invisible. Social justice covers the wider spectrum of situations where humans become commodities, where their faces do not reflect any glimpse of God’s image, where dignity is a privilege instead of a right.

Water justice speaks of access to clean water, not only those in one-third world. Climate justice is to stop the exploitation of Creation, one who is groaning in its suffering. Food justice addresses the usage of land to grow crops for foreign markets, while the local people welcomes hunger as a regular house guest.

At all levels of society, as people, we realize the need to care for the vulnerable, to welcome the marginalized, and to share what we have. This generation has grown more aware of the need to look beyond individual satisfaction to a greater sense of fulfilment as a community. From organizations, such as Me to We and Save the Children we have examples of the mobilization of young people to think beyond the self. Awareness and advocacy is a major part of working towards a just society.

Our current situation in Canada requires alternatives to “business as usual” to move beyond the great divide between the wealthy and the impoverished. When government policies favour the rich while making it almost impossible for the unemployed to collect benefits in a timely manner, it begs us to demand revision of such infrastructures that continue to disadvantage the disadvantaged. Having a living wage, a residence, and a community should be considered as necessities for the well-being of individuals and they are also in a closely connected circle, where the lacking of one would quickly cause the disappearance of the other two.    To live in a state of lacking is not only lacking the means to meet basic needs, but it is a depletion of one’s dignity. Being able to feed oneself, to earn a living wage, and to have a permanent shelter are several ways our society judges individuals as valuable and contributing members. Such persons are respected and seen, while those sitting on the sidewalk asking for assistance are ignored, invisible to respectable walker-bys.

The Gospel calls us to action. We are to be the light of the world. When we stand together, our light can bring hope to the darkest corners of injustices.

February 20 is the United Nations’ World Day of Social Justice, which promotes poverty eradication, full employment, and social integration. Think of how to stand with the vulnerable in our society and lift up everyone so we can all reach the top of the tree.