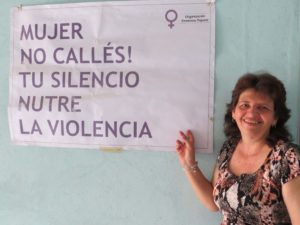 The day after my arrival in Colombia I was travelling on the Magdalena Medio river in a small ferry with Gloria Amparo, coordinator of the Popular Feminist Organization (OFP),  to visit women’s centres (casas de Mujeres) in Puerte Wilches and Cantagallo.

I had wondered how the surprising results of the plebiscite the week prior to my visit had affected the work of the OFP. On October 2, voters in Colombia narrowly rejected the country’s final Peace Accord. Despite the results, the OFP continued to believe in and work for the peace process with fierce determination, courage and creativity, as they have for the past 44 years.

This work for peace is demonstrated in very concrete ways. The OFP continues to operate casas de mujeres and run community kitchens which offer affordable meals and provide some income to the women’s centres. They provide psycho-social counselling, legal support to female victims of violence, human rights training, and youth programs. They also accompany survivors of the conflict who are seeking reparations.

At Puerto Wilches we met with local coordinator, Inez at the women’s centre. The OFP was preparing for a visit from the state governor to inaugurate the newly renovated centre. There are more than 100 members of the OFP in Puerto Wilches. The OFP’s work for peace with social justice also includes food sovereignty – in this case chickens. We met with OFP members who received 30 chickens per family. The chickens were producing eggs for consumption and to generate some income for families considered the most marginalized within the OFP membership.

Later we went across the river to the municipality of Cantagallo. Here we met with Nancy, the local coordinator and Eddie, an OFP member and member of the local victims committee. The OFP continues to accompany women victims of the war who are seeking reparations and implementation of the Victims’ law.  The “Ley de Victimas” ( 2011) was the Colombian government’s attempt to address the conflict and its effects through legal mechanisms by providing the rights to reparation, truth, and justice to victims.  The OFP is also engaged in a process of collective reparations with the State Victims Unit in recognition of the threats and violations they suffered as an organization, including the assassination of a number of their leaders.  The OFP has become an emblematic case of collective reparations in Colombia.

The following day, I participated in a meeting of the OFP leadership team and local coordinators.  At the beginning of the meeting, they described the context in which they were living and working, a context of uncertainty, fear, violence, ongoing paramilitary control and economic crisis. Today, the paramilitary maintain control over the region through a loan system called pago diarios which has developed into an extortion ring. Taking advantage of the desperate economic situation, loans are pushed at exorbitant interest rates. People have no choice but to borrow at these rates and if they are unable to pay them back they are harassed, threatened and sometimes killed. This extortion ring is a way to maintain control over the population and has caused displacement and driven many people into hiding.

We were told that in 2016 there has been an increase in violence against women and feminicide.  This violence has become normalized and it is often not reported. Alcoholism and drug addiction are very high.

The OFP is an example of the critical role of grassroots women’s organizations in the construction of peace and why support for these organizations needs to be a priority in Canada’s International Assistance program. KAIROS has referred to the work of the OFP in our testimonies and submissions to the government in the current International Assistance Review and the recent study on women, peace and security, which resulted in the critical report by Canada’s Standing Committee on Foreign Affairs and International Development, An Opportunity for Global Leadership: Canada and the Women, Peace and Security Agenda. The OFP shows how grassroots organizations are able to respond to the local context, accompanying women victims and survivors in the midst of ongoing and changing conflict.

As well as participating in the construction of peace at a local level, the OFP organizes and advocates for peace at regional and national levels. While I was there, they were organizing a Regional Gathering of women on territories of peace. They had planned this before the plebiscite and were hoping it would be an opportunity to talk about the actual implementation of the accords. Despite the result of the plebiscite, the OFP was going ahead with the gathering which was to bring together 200 women from the communities they accompany. The plan was to construct an agenda for peace and evaluate and strengthen the role of women in the peace process.  The gathering also included a vigil for peace, co-organized with the Diocese and other groups to visibly demonstrate the commitment of the local population to the peace process. The OFP hoped that the gathering would include the participation of international partners and diplomatic community.

My visit to Colombia included a meeting with the newly appointed Canadian Ambassador, where I could present messages from the OFP and other partners.   There were some very clear recommendations for Canada and the Canadian government about the peace process.  The Ambassador was very open and interested to hear from KAIROS and our partners.

“President Santos has made a commitment to the Colombian people for a political, negotiated solution to the conflict. Colombians and the international community need to hold him to it,” said Gloria Amparo during our visit to Puerto Wilches.

The OFP and other partners emphazised that the result of the plebiscite, in which only 50.8 percent of 37 percent of eligible voters rejected the peace accords, should not be used as an excuse to renegotiate the accords based on the interests of the elites or to make substantive changes. Partners were also very clear about what must remain in the accords. Victims’ rights, the rights of women and a commitment to gender justice must remain an integral part of the accord. I was reminded that this focus had not come easily. It was the result of the courageous and persistent work of women’s organizations and movements in Colombia. Partners added that the historic advances regarding transitional justice, an agreement around a temporary process within the Colombian justice system to transition towards the implementation of peace must also be preserved.

Partners emphasized that the bilateral ceasefire needed to be respected and upheld for as long as it takes to negotiate and implement a new agreement. Furthermore, the safety and security of human rights defenders and the thousands of Colombians who had taken to the streets to demonstrate for peace needed to be guaranteed. We are told that a number of these demonstrators, many of them students, had received threats.

The OFP made one final request before I headed to Bogota. They asked me to welcome the new Canadian Ambassador to his post on their behalf.  They spoke about how important it was for the embassy staff to visit the regions, referring to this presence of the international and diplomatic corps as a concrete expression of accompaniment that provides oxygen for organizations like the OFP to continue their work. With that, the OFP handed me an invitation to the Regional Women’s Gathering, addressed to the new Ambassador, and asked me to personally invite him to attend, something I made sure that I did.