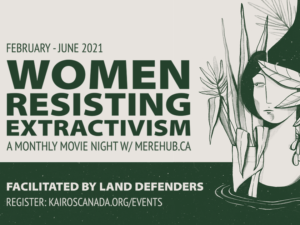 Join KAIROS’ MERE Hub on Tuesday, March 16 at 7:00pm EST for the second installment of its virtual film club on the gendered impacts of resource extraction.

Hosted by members of the Latin American Network of Women Defenders of Social and Environmental Rights, Nancy Fuentes (Grufides, Peru) and Miriam Garcia (ADES, El Salvador), this session’s main feature will be “No Tenemos Miedo” (“We Are Not Afraid”). “We Are Not Afraid” tells the story of how land defenders in El Salvador mobilized against mining.

The Latin American Network of Women Defenders of Social and Environmental Rights is a women’s organization representing 11 countries of Abya Yala that advocates for policies, projects, and practices that contribute to the defense of the rights of peoples, of nature, and of rights that are violated by extractive mining projects and that directly affect women. Acción Ecológica, a KAIROS partner, coordinates the Network.

Vidalina Morales (ADES, El Salvador), a key figure in the land defense struggle in El Salvador, will participate during the plenary/discussion period. The facilitators request that for the plenary/discussion session attendees have materials such as, paper, markers, pens, pencils, etc. And for the opening ceremony, the facilitators invite attendees to have a candle and/or symbolic materials that represent their territories or countries: these could be: seeds, fruit, water, soil, flowers, etc.

The Women Resisting Extractivism Film Club highlights the leadership of women land and water defenders and attempt to create a generative online space for participants to come together, learn, and build community. Each of the sessions will be planned, led, and facilitated by a land defender or ally.

The first session, held on Feb 16, was an extremely successful event hosted by Connor Sarazin, that brought together over 90 people from diverse networks to watch and discuss, “As Long as the Waters Flow.”