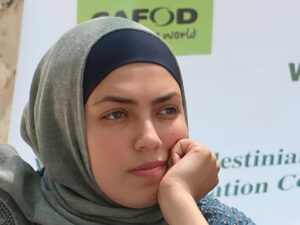 The pandemic has been particularly cruel to women, disproportionately impacting their wellbeing and safety, not only in Canada but also abroad.

KAIROS’ international partners, operating in some of the most protracted conflict areas in the world, report dramatic increases in gender-based domestic and state-driven violence since March. This situation is fueled by escalating inequality, heightened vulnerability and a rise in religious and cultural fundamentalism that is inherently misogynistic.

Despite these growing threats, women-led grassroots organizations offer women a lifeline, helping them heal, earn incomes, and become agents of positive change in their communities and countries. Twenty years ago, a United Nations Security Council reaffirmed the important role women play in preventing and resolving conflicts, including humanitarian responses and post-conflict reconstruction, by adopting resolution 1325 on women, peace and security.

Marking the 20th anniversary of UNSCR1325 on October 30, the minister of foreign affairs announced $14.9 million in new funding for women peace-builders globally, with $5 million of that targeted at grassroots organizations. According to Global Affairs Canada, Canada will also hold a year-long global advocacy campaign through its network of diplomatic missions to support and protect the work of women peace-builders.

This announcement is welcome. Canada has a long way to go, however. The Canadian government’s progressive Feminist International Assistance Policy, announced in 2017, has been hamstrung by limited funding, evident in Canada’s paltry overseas development assistance (ODA) contribution which, at 0.28 per cent of national wealth, is less than half that of countries like Norway and is well below the international standard of 0.7 per cent.

As women shoulder the brunt of COVID-19, the need for financial and diplomatic support for grassroots women-led organizations is needed now more than ever.

Take the Jordan Valley in the West Bank, where some communities experience growing income inequality and higher cases of domestic violence. KAIROS’ partner, Wi’am: Palestinian Conflict Transformation Centre offers Palestinian women psychosocial support, medical accompaniment and counseling, as well as numerous workshops on gender-based violence, economic empowerment and human rights decision making. Initially, participants are reserved and hesitant to participate in these workshops, but after a few meetings, they become vocal and confident.

This response is typical, according to KAIROS’ grassroots women-led partners, which operate in South Sudan, the Democratic Republic of the Congo, the Philippines and Colombia, in addition to the West Bank.

During the pandemic, these organizations re-imagined and pivoted programs to address new challenges and vulnerabilities of marginalized communities.

Their lives are under threat, however. In Colombia, for example, just days after public health lock downs began, Carlota Isabel Salinas Pérez, a member of the Organización Femenina Popular (OFP), a KAIROS partner, was killed. According to the OFP, the rise in violence against women, particularly women human rights and land defenders, threatens to roll back the peace process and advances achieved in securing women’s equality.

Canada is well positioned to take a lead role in realizing this vision. It can start by increasing its ODA contribution to reach the international standard and, while it does so, build on its contribution to women-led grassroots organizations, including support for their recovery and transformation efforts in response to the pandemic. For funding to reach these organizations, it must be accessible, flexible, predictable and long-term.

Finally, Canada’s voice and influence at the UN and with governments of countries in conflict can help increase space for women to participate in peace processes at local, national and international levels and ensure that their lives and rights are protected.

Just as the pandemic has escalated violence against women and increased gender inequalities, it has heightened understanding of the essential role of grassroots women-led organizations and peace-builders in constructing a just and inclusive recovery, free of violence. Canadian financial and diplomatic support can embolden this transformative grassroots leadership. The time is now.

Jane Thirikwa is the Global Partnerships Coordinator at KAIROS Canada. Jane is passionate about work that supports social justice, equality, non-discrimination and respect for human rights. She has worked within Kenya’s civil society, in the U.S.A. and Canada. Jane is a Gender and Women’s Studies graduate from York University and is also an Atlas Corps and Human Rights Campaign Fellow, USA (2014).