Women of Courage in eastern Democratic Republic of the Congo: Tour Review 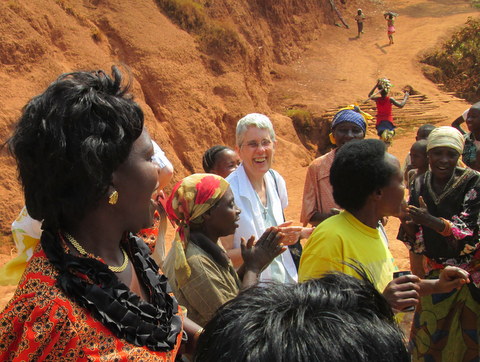 The KAIROS church delegation to the Democratic Republic of the Congo (DRC), which took place between June 17th and 30th, was invited and hosted by KAIROS-funded partner, Héritiers de la Justice (Heirs of Justice). HJ is an ecumenical human rights organisation based in South-Kivu province in eastern DRC. It advocates for women victims and survivors of gender-based sexual violence, provides witness, accompaniment and solidarity, and works to raise awareness and understanding of the many challenges these women face.  KAIROS supports HJ’s legal clinic, which assists rape survivors to navigate an extremely dysfunctional justice system, provides psycho-social support, and helps them re-establish their lives through mediation and reconciliation.

The delegation looked at how gender-based sexual violence correlates with conflict minerals.  The nine person (six women, three men) delegation was comprised of representatives of the Canadian Religious Conference, the Presbyterian Church in Canada, the United Church of Canada, the Public Service Alliance of Canada (which support HJ’s legal clinic through KAIROS), as well as KAIROS partner the Fellowship of Christian Councils and Churches in the Great Lakes and Horn of Africa (FECCLAHA), the National Council of Churches of Burundi, and KAIROS staff.  You can view their bios here.

The delegation started in Bujumbura, Burundi, at a meeting with the Secretariat of the multilateral International Conference on the Great Lakes Region (ICGLR). On the agenda were sub-regional legislative and legal approaches for addressing the relative impunity in which gender-based sexual violence is committed in eastern DRC.  The delegation then made its way through Rwanda to the eastern DRC city of Bukavu, in South-Kivu, on the southern shores of Lake Kivu. For a week, the delegates travelled throughout the city and surrounding area visiting HJ community organizations, civil society groups, and government and elected officials, including the first woman Indigenous provincial minister.

At the end of its time in South-Kivu the delegation and HJ held a joint press briefing with several radio stations, including Okapi, a local UN station.  View an English version of the delegation’s text. Then it was off to the capital Kinshasa, in western DRC, to meet with the Canadian Embassy, the ICGLR DRC focal point, the Ministers of Justice and Gender, Family and Children, the leaders of the National Conference of Bishops (CENCO), the ecumenical Church of Christ in Congo, and civil society groups.

While in Bukavu, the delegation participated in a graveside memorial service to commemorate the life and ultimate sacrifice of Pascal Kabungulu, the late Executive Secretary of HJ. A staunch, courageous and renowned human rights defender, Mr. Kabungulu was assassinated in 2005 in his home in front of his family allegedly by the Congolese military for what he knew about illegal conflict minerals.  His widow is a political refugee living in Quebec.Read her touching message which was read at the commemoration at a hillside cemetery.

View the tour blog, which includes moving reflections and many photos, here.

Upon the delegation’s return to Canada, an Ottawa Citizen reporter wrote this article.

The delegates will reconvene in Montreal on August 27th to evaluate the tour, and to plan media and advocacy outreach for the fall.