Women land and water defenders are the real peacebuilders 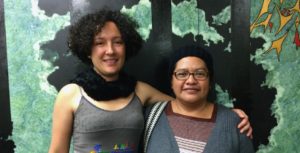 Large-scale resource extraction often perpetuates violence, even in countries with peace accords. Those who mobilize to protect the land and water to build peace are often women.

Such is the case in Guatemala and Colombia, where extractive mega-projects with Canadian interests hinder peacebuilding processes.

Guatemala’s civil war ended in 1996 with the signing of the peace accords. In the nearly four decades of internal conflict, hundreds of thousands of people died, and tens of thousands went missing, the vast majority of whom were Indigenous.

And yet, the same peace agreement further opened Guatemala to foreign investment by taking advantage of lands from which Indigenous communities had been dispossessed. Since 1996, the number of Canadian-backed extractive projects on or near Indigenous communities, particularly mining projects, has increased.

Not surprising, conflicts over territory, violations of the right to consultation, and disparity in decision-making powers have accompanied these megaprojects. Indigenous women, who feel the impact of this conflict acutely, are also leaders in the defence of collective rights for land and water.

Natalia Atz Sunuc is a Maya Kaqchikel human rights defender in Guatemala. In accordance with the peace accords and community specific protocols, she has supported Indigenous communities in carrying out community-led consultations.

She is one of many Indigenous women who play a central role in ensuring widespread participation in and full transparency of community consultations. And despite exemplifying Indigenous self-governance in action, the results of these consultations — often to reject extractive projects — have not been recognized by the state.

For its part, the Guatemalan state has granted extractive companies mining permits. Indigenous communities have challenged these clear violations of the right to free, prior, and informed consent through non-violent civil disobedience. Public and private entities have responded with violence. Continue reading this op-ed on rabble.ca.

This Op-ed was written by Gabriela Jiménez, the Latin America partnerships coordinator at KAIROS: Canadian Ecumenical Justice Initiatives and published on Nov. 27 on Rabble.