Spirited Reflection: Women of Courage – making visible the women who work for peace 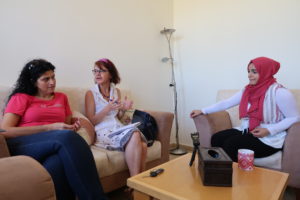 I am not a theologian, but when I hear the passage from Luke 19 and Jesus’s words as he enters the city of Jerusalem: “If you, even you, had only recognized on this day the things that make for peace. But now they are hidden from your eyes,” I think Jesus could very well have been referring to women or the invisible work of women who are making peace. This work and these women are often “hidden from our eyes.”

Together with partners, KAIROS has developed the Women of Courage: Women, Peace and Security program. Part of our work with partners is to make visible or ‘visibilize’ these women and their work.

We have learned so much from these partners about the impact of war and militarized conflict on women and how women are victims of war several times over: Women experience sexual violence during war where rape is used as a weapon of war; war increases domestic violence; women are harassed or killed for speaking out against war. Women are excluded from negotiations for peace.

We have also learned that women are not simply victims or survivors of war, even though they are often portrayed as such. We have learned that women have a critical role in peace building and building conditions for peace and that when women victims are provided with the support that they need to heal, reclaim dignity and assert their rights (includes psycho-social services, trauma healing, legal services, human rights training) they themselves become active peace builders and human rights defenders. Finally, we have learned that the impacts of war on women and their role in peacebuilding are under-recognized, ‘invisibilized’, and that both war and peace are dominated by men.

On a positive note, there is an increase in recognition of the role of women in peacebuilding. There are now studies showing that peace processes involving women are not only more equitable, inclusive and just – these processes are more effective and durable (by 35% in fact). In Canada we now have a feminist international assistance policy that identifies women and peacebuilding as an action area.

KAIROS’ work with partners on peacebuilding through the Women of Courage program represents historic work that is finally being recognized. As part of program planning, I had the opportunity to travel to the five countries involved, meet with the partners and learn first hand about their work.

To visibilize the “things that make for peace”, I want to highlight my recent trip to Palestine and meetings with our partner Wi’am: Palestinian Conflict Resolution Centre. Nothing really prepares you for the occupation. I have experience in travelling to countries with militarized conflict, human rights violations and repression, but the occupation adds another layer of repression and control. Many people have heard about the separation wall, but what is so striking about the occupation are the number of walls, checkpoints, the human and financial resources, the intelligence and military machinery. A system meant to protect one people results in the humiliation and oppression of another, threatening to break their spirit. It’s a system that allows patriarchy and violence against women to thrive. It’s a system that leaves little space to even imagine peace, reconciliation and justice, never mind work for it.

And yet there is incredible humanity and resilience and KAIROS partner Wi’am is an example. They are doing things that “make for peace”, particularly in their work with women.

They are a visual testament to resilience and humanity in the face of occupation. The offices and grounds of Wi’am include a playground backing on to the separation wall. These grounds are the site of community-based programs for women, including income generating projects, legal training and workshops on human rights. They work with a women’s shelter and run weekly women’s groups. They have a youth program where they discuss equal rights, gender justice and male ally-ship. They have a summer camp at which time the grounds are overrun with 150 children from Bethlehem and the nearby refugee camps.

One of the highlights of my recent visit was travelling with Lucy Talgieh, the women’s coordinator of Wi’am, to the monthly meeting of the women’s groups in the communities of Sureef and Al Jaba, close to Hebron. At these meetings the women talk about the daily challenges of occupation as well as their families and spouses. They learn about their rights and they build community and solidarity. They told me how much they look forward to these meetings. One woman came with her almost two- week old baby because she did not want to miss a meeting. In some cases, they told us how their husbands were opposed to them meeting and in others how their husband and families have come around and were now more supportive, even showing interest.

I asked Lucy – “How do you measure impact? (A question we are frequently trying to answer when monitoring and evaluating the program). “You can tell when women gain confidence and self esteem” she said. “You can hear it in their voices. They start to interrupt and propose things.” These women are now proposing income generating initiatives – ovens and pastry businesses. They want more than workshops.

This is resilience in the face of ongoing occupation. The stories of daily life are unimaginable and heart breaking. Yet, these women do not see themselves as victims. And they are not simply surviving. They are interrupting, creating and building conditions for peace when the occupation ends.

These are the things that make for peace. This is the work of women for peace that has been hidden from our eyes, work that we must support and make visible.

I have learned so much from partners about what peace is and what peace is not. This has inspired me to reflect again on the poem by Brian Wren:

Say ‘no’ to peace

If what they mean by peace
Is the quiet misery of hunger
The frozen stillness of fear
The silence of broken spirits
The unborn hopes of the oppressed.
Tell them that peace Is the shouting of children at play
The babble of tongues set free
The thunder of dancing feet And a father’s voice singing.

Say ‘no’ to peace
If what they mean by peace
Is a rampart of gleaming missiles
The arming of distant wars
Money at ease in its castle
And grateful poor at the gate.
Tell them that peace
Is the hauling down of flags
The forging of guns into ploughs
The giving of fields to the landless
And hunger a fading dream

I have added a few more lines, based on my experience with our Palestinian partner Wi’am.

Say no to peace
If peace is defined by men and excludes women
Tell them that peace is
Women interrupting, initiating, creating, defying and thriving

Rachel Warden is the Partnerships Manager at KAIROS Canadian Ecumenical Justice Initiatives. She has been involved in the human rights and social justice work of the churches for over 20 years. Since 2010 Rachel has coordinated the KAIROS Women of Courage program which seeks to support and make visible the critical role of women’s organizations and movements in peacebuilding and ecological justice.