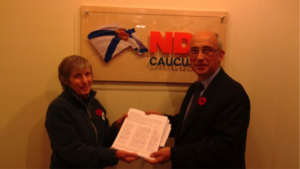 Photo caption: Linda Scherzinger, KAIROS Halifax, delivers 1700 signatures to Gary Burrill, Leader of the Nova Scotia NDP prior to presentation in the House of Assembly.

The voices of 1,700 Nova Scotians who signed the Nova Scotia KAIROS Petition supporting TRC Call to Action #62.1, “Education for Reconciliation,” were heard in the Nova Scotia House of Assembly on Tuesday, November 8. The Honourable Lenore Zann (MLA Truro-Bible Hill-Millbrook-Salmon River) presented the petition at 1:00 p.m. Zann is also the NDP critic for both Aboriginal Affairs and Education. A significant population of First Nations people are her constituents.

Zann acknowledged and introduced the 12 KAIROS members and supporters who were in the Legislature gallery to witness and support the presentation.

Linda Scherzinger, KAIROS Halifax, said: “It was meaningful for all of us to see that our efforts had reached this step.”

Call to Action #62.i urges provincial governments and educators to ensure that all students learn about Indian Residential Schools (IRS), treaties, and the contributions made by First Nations, Inuit and Métis to Canada. This action, dubbed Education for Reconciliation, is part of KAIROS’ Winds of Change campaign.

On October 1, 2015 the NS provincial government responded to the TRC Call to Action # 62.i by signing a Memorandum of Understanding with Mi’kmaw Kina’matnewey (MK), the agency that has been responsible for developing curriculum for schools in Mi’kmaq communities since the Mi’kmaq Education Act, 1998.

Over the past two years the MK team, working with Mi’kmaq Elders and educators , have designed and developed excellent materials which are being used in public schools across Nova Scotia.

Mary Rigby of KAIROS Atlantic, commends some schools for beginning to use these materials, but points out that TRC’s Call to Action #62.i says teaching the history and present day reality of Indigenous peoples in Canada must be mandatory in the school system. Even though curriculum materials may be available, teacher training and continuing education courses are necessary before this can become a reality. Therefore, KAIROS calls upon the Government of Nova Scotia to make funds available for necessary teacher training and continuing education so that all teachers in the educational system are prepared to fulfill the requirements of this Call to Action. The TRC released its 94 Calls to Action in June 2015 after a five year cross-Canada process that gave Indian Residential Survivors the opportunity to share their experiences. KAIROS began its response to the Calls to Action by focusing on #62.i: to make age-appropriate curriculum on residential schools, Treaties, and Aboriginal peoples’ historical and contemporary contributions to Canada a mandatory education requirement for Kindergarten to Grade Twelve students.

Needs Improvement: Educators make progress on Indigenous curriculum, but more work to do

Winds of Change: Education for Reconciliation update in BC