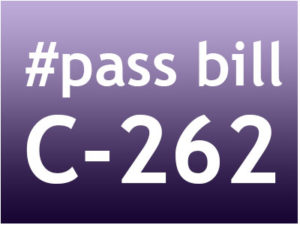 Bill C-262 is now before the Standing Senate Committee on Aboriginal Peoples.

There are strong concerns that some senators are engaging in filibuster tactics to undermine the bill while in Committee. This includes introducing amendments. Any amendment will in effect kill the bill given the limited time to include them. Some senators contend that the bill will codify the UN Declaration on the Rights of Indigenous Peoples in Canadian law immediately. Please note that the bill will not have that effect.

Committee examination will not go past June 5. Committee members will hear from legal and academic experts on Wednesday May 29. Please let the following senators know by email, phone or social media that rejecting Bill C-262 is equivalent to rejecting reconciliation. Urge that they do not delay this important bill!

To learn more about the bill, visit kairoscanada.org/what-we-do/indigenous-rights/pass-bill-c262