The Nation to Nation Bike Tour: Understanding through the Blanket Exercise

Editor’s Note: The Blanket Exercise explores the shared history of Indigenous and non-Indigenous people on the lands of Turtle Island (North America). Blankets are used to represent Indigenous lands, and the workshop participants “live” on the blankets, representing Indigenous peoples. Starting before contact with Europeans, and moving through periods of colonization and resistance to colonization, the participants arrive in the present with a deeper understanding of our shared history.

Back at our starting destination on Thompson Island in Akwesasne, we experienced the KAIROS Blanket Exercise for ourselves. The impact this exercise had on us was overwhelming. It became clear to us what we had to do — the public needed to know the things we had learned and our minds became one to reach a common goal: to break the barriers between Native and non-Native peoples by spreading awareness of our shared history.

We have performed the Blanket Exercise in three Ontario communities during this bike tour: Brockville, Gananoque and Kingston.

Our first public event was at the Wall Street United Church in Brockville where the audience was enthusiastic and supportive. Towards the end they responded very openly as to how shocking the truth was. One person commented, “I think I am racist, now I have the incentive to look into the history and politics of First Nations people.”

The second time we did the Blanket Exercise was in a park in Gananoque. It was much more challenging because we had an almost non-existent audience. No one was interested until members of our group began to walk around the park and converse with the people around us. 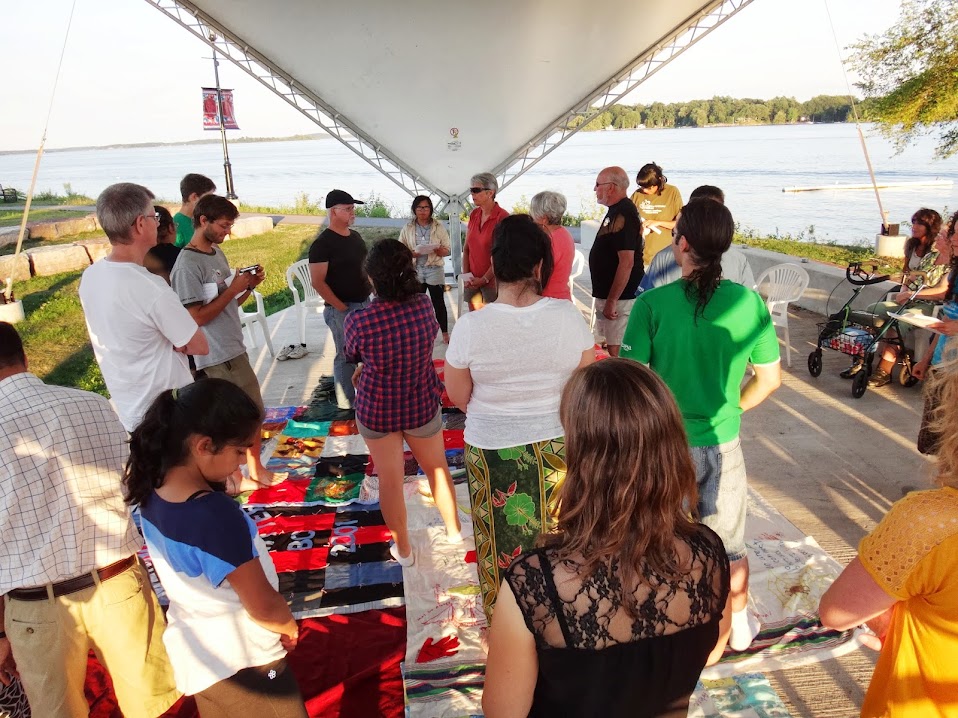 At first the audience seemed obligated and lost but the moment they heard the opening of the presentation their eyes and ears became keen. The opening was done in the Mohawk language. One of our viewers expressed that it was a sign of hope because the language has not been lost; that it is prominent example of resistance to assimilation.In Kingston there was positive support because the Blanket Exercise was well publicized and the audience was not just people who supported the church or people who had to be persuaded to join us. “This is a very powerful exercise,” one participant said, “I cannot believe it was done with something as basic as a blanket!”

Halfway through the presentation some of the audience members began to tear up. One member of our audience wept for she was a First Nations woman who had a complete understanding of the difficulties faced by Indigenous people in Canada having lived through it herself.

Even though it was an emotional presentation, it was a positive experience for the audience because we are youth coming from all over the world spreading an important message to the public. One of the people in the audience said, “I think it is poignant that young people are performing this presentation. I believe this is the generation that is going make a change. It was a marvelous presentation, thank you. “

A common response from the audiences was guilt, but as the First Nations members of our group said, “We did not do this workshop to make you feel sorry for us. We are strong people. We are here and we are not going anywhere.”