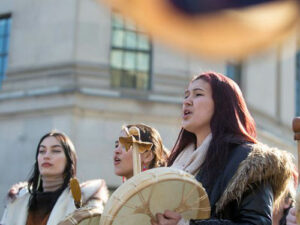 Indigenous women, pictured Feb. 24, 2020, leading a protest in Ottawa in support of the Wetʼsuwetʼen nation and against the building of the Coastal Gasoline pipeline through their traditional territory. The Hill Times photograph by Andrew Meade

Indigenous women, pictured Feb. 24, 2020, leading a protest in Ottawa in support of the Wetʼsuwetʼen nation and against the building of the Coastal Gasoline pipeline through their traditional territory. The Hill Times photograph by Andrew Meade

Invite us to the table. End the discrimination. And respectfully use a distinction-based approach when it is needed. Not as a blanket approach to exclude women and gender diverse people or other relevant stakeholders.

The federal government likes to say it has adopted a “distinctions-based” approach for dealing with the myriad of issues facing Indigenous people in Canada. We have other words for it, like contrived, or colonialist, or just plain sexist.

The fact is that, when the Liberal government was grasping for easier ways to negotiate with the Indigenous peoples of this country, it came up with this “distinctions-based” model that was never subjected to the gender-based analysis it promised to apply to its decision-making.

That analysis would have been critically important in this instance, and the result of its omission is a flawed framework that takes no account of gender equality. It has created a situation in which Indigenous women are left without a seat at “the big boys’ table” when important issues affecting their wellbeing, and that of their children, are discussed.

That may work for the government and the other male-led national Indigenous organizations.

But it does not work for Indigenous women who are the heart of their communities.

This framework is an extension of the Indian Act in which women are excluded and marginalized. It is also an approach that ignores the way in which our societies were structured. Many First Nations in Canada are traditionally matrilineal and hold spiritual beliefs that are based on feminine ideology.

It does not align with the United Nations Declaration on the Rights of Indigenous People which says, in Article 44: “All the rights and freedoms recognized herein are equally guaranteed to male and female indigenous individuals.” The federal government is now trying to fully implement that Declaration and should take account of its provisions.

It is equally important to note that the National Inquiry into Missing and Murdered Indigenous Women and Girls found the ongoing political marginalization of Indigenous women is one of the reasons that so many of us are murdered or go missing in this country. The government’s “distinctions-based framework” serves only to perpetuate that marginalization.

Yes, it makes things simple for the government to say there are three “distinctions-based,” male-led groups that, together, represent all the Indigenous people of Canada. But that is simply not true. It is a construct of the government’s own making. It puts expediency over equality and justice.

I would also point out that the framework is impractical. Consider a scenario in which a public service, like a shelter, is needed for Indigenous women in all major cities. Would we provide one for the First Nations, one for the Métis, and one for the Inuit? Of course not. But, the distinctions-based framework could be proffered as an excuse to build nothing at all—leaving Indigenous women with nothing but a mainstream alternative that does not work for them.

Indigenous women are not “special interest groups.” We are rights holders under Section 35 of the Canadian Constitution and we have a right to be represented by the organization of our choice, not by the choice of the government.

We, at NWAC, have been advocating and defending the rights of Indigenous women—Métis, Inuit, First Nations, non-status, off reserve, disenfranchised—in Canada since 1974.

We have a large policy and programs group that works nationally and internationally to research and disseminate information about issues affecting Indigenous women and gender diverse people.  We have also added a service-delivery component to our organizational model that offers healing services through our Resiliency Lodge.

We just held a historical international summit with experts from all across the Americas on how to end the scourge of violence that afflicts Indigenous women in every country in this hemisphere. It drew nearly 1,000 participants.

We are the national organization that represents Indigenous women in Canada, and we deserve to be treated as such.

This “distinctions-based” approach is an extension of the colonialist attitude that we, at the Native Women’s Association of Canada (NWAC), have found to be pervasive throughout every federal ministry and we believe it is discriminatory.

How does this sexism stop? Invite us to the table. End the discrimination. And respectfully use a distinction-based approach when it is needed. Not as a blanket approach to exclude women and gender diverse people or other relevant stakeholders.

Alma Brooks is Eastern Regional Elder with the Native Women’s Association of Canada (NWAC) and a key partner and voice in KAIROS’ gendered impacts of resource extraction work.

Originally published in The Hill Times on April 14, 2021