The Voice of the Bell by Diane Munier 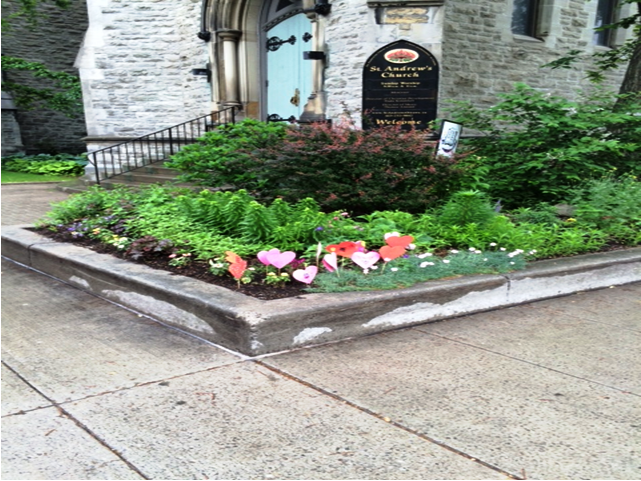 Diane Munier is a tearcher and member of St. Andrew’s Presbyterian Church in Ottawa.

“Can you see anything? Are they coming yet?”
Elizabeth, our church administrator, and I squinted up the street.
Standing at the open church door, gripping the bell rope, we were ready to ring our bell and cheer the Truth and Reconciliation marchers on their way.
Where were they?
Six thousand strong, in a huge demonstration to move forward together from their painful past, the marchers were due to parade right in front of our church. They were walking the 4.5 kilometres from Gatineau to Ottawa City Hall, and we were set to ring our bell, letting them hear loudly and clearly that we supported them.

A cyclist raced up and pointed: “You won’t believe it! Thousands are marching and they’ll be here in 15 minutes!”
He dashed back to look again.

“Can you hear anything? Are those drums?”

A motorcycle policeman swerved up in front.
“You folks aren’t letting out now, are you? That might be tricky”
“No, no – we’re going to ring our church bell, we’re letting the marchers know we’re with them.”
“You are? That’s great!” He beamed at us, and roared off.

“Go and look again – as soon as they pass the Archives, we’ll start pulling!”

“Wait…wait….I hear something – I hear the drums!

And with three great strong pulls, our bell sang out, echoing down the street, pulling the marchers towards us.
“They’re here! They’re here!”
The drums were leading the way, the bells pealing and pulling and the drums thumping the counterpoint.
They were right in front now – row upon row upon row upon row of marchers.
Aboriginal and non-aboriginal, with hundreds of residential school survivors, families, supporters, friends, all walking shoulder to shoulder.
Haida, Nootka, Dene, Cree, Blackfoot, Anishinaabe, Mohawk, Algonquin, Six Nation, Inuit, Innu, Micmac: dozens of tribes and groups marching side by side. Little children, young people, mothers and fathers, grandparents – all marching together. People in wheelchairs, people in walkers, people with banners and flags and photos and eagle feathers. People in glorious native dress, people in jeans – and so many in red t-shirts with “I am a Residential School Survivor” on the front.

“Here,” a woman wearing a red survivor t-shirt handed me a small pouch of tobacco. “Thank you so much for doing this. I want you to have this.”

Two young aboriginal men bounded up the steps with their cameras:
“We must record this! This means so much to us! Keep pulling!”

A man with a child on his shoulder blew us a kiss: “Thank you for ringing!”

A chief, his eagle feather headdress brushing the ground, turned and saluted us.

An elderly Inuit woman, supported by two younger women – her daughters perhaps – slowly mounted our steps.
“I am a survivor” she said, looking at me steadily. “May I ring the bell with you?” Wordlessly, I handed her the bell rope and let her ring by herself.
She pulled seven, eight times, then handed the rope back.
“That was wonderful,” she smiled. A blessing for me. “Thank you for doing this for us.”

We had been ringing non-stop for half an hour.

Gradually, the crowds thinned and the marchers disappeared up Wellington Street, past Parliament Hill and out of sight.

Now, our bell was silent.
Peter stood exhausted and hoarse.
Elizabeth was weeping.
I was too full to speak.

What, then, had our bell said to the marchers?