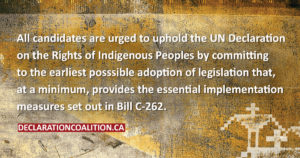 OPEN LETTER TO ALL CANDIDATES IN THE FEDERAL ELECTION

The Truth and Reconciliation Commission, the National Inquiry into Missing and Murdered Indigenous Women and Girls, and numerous reports by international human rights bodies have all documented the profound and tragic harms that have resulted from Canada’s colonial laws and policies. Ongoing adverse impacts include denial of Indigenous systems of governance, jurisdiction and laws; dispossession of lands, territories and resources; the ongoing tragedy of Indigenous lives brutally cut short; essential opportunities denied to Indigenous children and youth; and the lack of adequate financial and other assistance to maintain and revitalize Indigenous cultures, traditions and languages in the face of continued threats.

All these bodies have called on federal and other governments to heal the harm and build positive relations between Indigenous and non-Indigenous peoples.

In the last session of Parliament, Senate filibustering prevented the passage of Bill C-262, a private member’s Bill that would have established a legislative framework to guide the work of implementing the Declaration. This was despite the fact that Bill C-262 had been debated and adopted by the House of Commons in 2018 and that all parties in the House had subsequently joined in a unanimous, non-partisan motion calling on the Senate to pass Bill C-262 into law.

While our Nations and organizations were profoundly disappointed that the opportunity to adopt this crucial legislation was so cavalierly squandered, an important foundation has been established. The next session of Parliament must build on this foundation by prioritizing the earliest possible adoption of government legislation that fully reflects or exceeds Bill C-262. Key elements would include:

· A commitment to work collaboratively with Indigenous peoples in every aspect of implementation of the Declaration.

· A process to reform federal laws, policies and regulations to ensure they meet or exceed the minimum standards set out in the Declaration.

· A commitment to develop a national action plan for collaborative implementation of the Declaration’s provisions.

· A requirement for regular reporting to Parliament so that there is transparency and accountability for the progress made.

The Declaration was adopted by the UN General Assembly 12 years ago, on September 13, 2007. The Declaration’s provisions reflect the way that existing human rights protections, including legally binding international treaties, have been interpreted and applied by international and regional human rights bodies. In other words, Canada’s obligation to respect, protect and fulfill the rights affirmed in the Declaration is well-established and concrete measures to implement these provisions are long overdue.

The Declaration is not abstract or merely aspirational. It affirms the minimum standards urgently needed to address and heal the harms inflicted on Indigenous peoples by a long history of racist and discriminatory laws, policies, and practices.

2019 is the International Year of Indigenous Languages. In this important year, we can look to the Declaration for guidance on language rights:

Article 13 affirms the right of Indigenous peoples to “revitalize, use, develop and transmit to future generations their histories, language, oral traditions, philosophies, writing systems and literatures and to designate and retain their own names for communities, places and persons.” Article 14 states that “Indigenous peoples have the right to establish and control their educational systems and institutions providing education in their own languages, in a manner appropriate to their cultural methods of teaching and learning.” The Declaration also calls on states to take effective measures, including through funding and other assistance, to ensure the “full realization” of these rights.

This is merely one example of using the Declaration effectively to guide the promotion and protection of Indigenous peoples’ human rights.

Accordingly, our Nations and Organizations are calling on all candidates in the federal election to commit to:

1. Supporting the earliest possible adoption of a federal legislative framework for implementation of the Declaration that, at a minimum, provides the essential implementation measures set out in C-262

The Coalition for the Human Rights of Indigenous Peoples.

For more information on implementation of the UN Declaration, please see our factsheets.

· Interpreting the UN Declaration on the Rights of Indigenous Peoples

· Myths and Misrepresentations about the UN Declaration and Bill C-262

· Free, Prior and Informed Consent FAQ