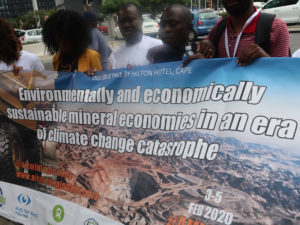 While in Africa for partnership visits, I took the opportunity to travel to South Africa to participate in the Alternative Mining Indaba in Cape Town and meet with WoMin African Alliance in early February.

“Indaba” is a Zulu and Xhosa word for an important gathering, meeting or conference. The world’s largest annual mining investment event held in early February in Cape Town, South Africa is called the Investing in African Mining Indaba (hereafter, Mining Indaba). This year was its 26th edition with some 6,500 international and local participants, including the presidents of the Democratic Republic of Congo and Sierra Leone, over 40 African cabinet ministers, at least 900 global investors, about 1,600 mining industry operators and nearly 200 exhibitors in the Cape Town International Convention Centre.

Across town in the gentrified Woodstock area of Cape Town was the 11th edition of the “Alternative Mining Indaba” (AMI) which is a simultaneous counterpoint gathering taking the side of affected communities, held February 3-5. Some 300 hundred participants attended at the outset, including human rights and environmental advocates, community and faith-based organisation, representing  33 countries. They met under the theme of “environmentally and economically sustainable mineral economies in an era of climate change catastrophe.”

The AMI grew out of a felt need by members of the Economic Justice Network (EJN) of the Fellowship of Christian Councils and Churches in Southern Africa (FOCCISA), which KAIROS has occasionally supported in the past.

Malcolm Damon, as the former Executive Director of EJN-FOCCISA, had played an important role in establishing the AMI which was intended to amplify the voices of communities impacted by the extractive industry while empowering communities to seek greater accountability from mining companies for social and environmental damages. Malcolm passed away in early September 2019 after a brief bout with cancer. His life was commemorated at AMI, at an event at which I spoke.

Planned by AMI Steering Committee including EJN-FOCCISA and the reputable Bench Marks Foundation, the AMI itself included cameos by the likes of Oil Change International and others, as well as side events by such groups as Corruption Watch, AFRODAD (African Forum and Network on Debt and Development), and the WoMin African Alliance.

The AMI Steering Committee also invited Mark Cutifani, the CEO of Anglo American and current chairperson of the International Council on of Mining and Metals (ICMM) to speak. Although Cutifani was given space to give a predictable presentation on sustainable corporate engagement, nobody from the AMI was provided a similar platform at the Mining Indaba across town. Sheri Meyerhoffer, the Canadian Ombudsperson for Responsible Enterprise (CORE), who participated in the Mining Indaba, quietly slipped into the AMI on its second day.

I was also in South Africa to meet with the WoMin African Alliance, an African women’s alliance uniting against destructive resource extraction and its impacts on the climate crisis. WoMin is a pan-African partner with whom KAIROS is developing a closer working relationship. I had met with WoMin staff in Johannesburg several days earlier and participated in WoMin’s side event at the AMI, entitled “Africa is Living the Climate Crisis Now!” The event covered, among other issues, how African women are the most impacted by the climate crisis, and identified false solutions, and effective solutions that need adoption.

On the third and last day of the AMI well over 100 participants boarded buses that took us downtown where we marched for several kilometers to the Cape Town International Convention Centre to deliver a communique to Mining Indaba about issues raised during the three days of AMI deliberations. The communique presented the voice of mining-affected communities, the extractive industry and governments at Mining Indaba.

Mining Indaba sent out only a handful of representatives to meet the AMI “protester” delegation on the street to hear a reading of the communique, saying many of the right things in response to AMI’s resolutions and recommendations. They received the communique and invited only four AMI representatives into the Convention Centre itself. This felt exceedingly asymmetrical and disrespectful given that the Anglo American CEO and Chairperson of the ICMM had just presented at the AMI. Yet it appears that this interaction happens year after year between Mining Indaba and the AMI, allowing the mining industry to appear to engage without committing to any substantive structural changes.

A drawback to the AMI was that neither affected communities nor labour were adequately represented. Issues of free, prior and informed consent (FPIC) recognised in the United Nations Declaration on the Rights of Indigenous Peoples (UNDRIP), as well as “the right to say no” were not sufficiently addressed at the AMI and not included in the communique.

Affected communities as well as civil society, including the churches, must do more to include these voices and ensure these issues are addressed, otherwise the message  becomes more a concession that industrial mining is already in our communities and a focus on making the best of it by improving governance practices where possible.

The content of the communique was all-inclusive which helps encompass many issues in one place. Nevertheless, it may be too much year after year to try to raise so many issues at once in relation to the extractive industry, and more effective to focus on a few key items for advocacy through a strategic leverage point.

As well intentioned as the AMI process has been over its 11-year history, it is long past time for the AMI to reinvent itself as more of a strategic critical interlocutor to the Mining Indaba. That would presumably require opening the AMI evaluative process for more transparent input and scrutiny.