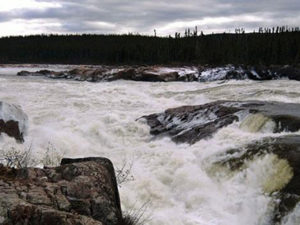 KAIROS has signed on to a letter in solidarity with the Inuit, Innu and non-Indigenous people of Labrador calling on the federal government to review and revoke permits for the Muskrat Falls hydroelectric project. At issue are permits that would allow the flooding of the reservoir behind the dam without the free, prior and informed consent of the Indigenous peoples as required by the UN Declaration on the Rights of Indigenous Peoples. If the reservoir were to be filled without first removing organic materials from the flood zone the resulting methylmercury contamination will pose a grave threat to the health and traditional culture of the Indigenous peoples.

The Muskrat Falls hydroelectric dam in Labrador, Canada, poses serious multigenerational harms to the Inuit, Innu, and non-Indigenous people of Labrador. Flooding of the reservoir at Muskrat Falls can start any day after October 15, 2016. With opposition escalating at the grassroots level and beyond, and the details of methylmercury impacts becoming more broadly understood, thanks to the Nunatsiavut Government and Harvard University’s research partnership study(1) about the impacts that methylmercury has on human health, it has become clear this project must be stopped. Similar to the proposed Site ‘C’ dam in northern British Columbia(2), Muskrat Falls would devastate the local culture and way of life of all three Indigenous groups and the people who inhabit the Lake Melville Region of Labrador.

The Muskrat Falls hydroelectric dam was lead by former Premier Danny Williams. Downstream from Churchill Falls on the Churchill River near Happy Valley – Goose Bay, Newfoundland and Labrador, this project has a growing price tag of over $11 billion dollars. Nalcor Energy, the crown-corporation tasked with developing the project, has admitted it has been a complete boondoggle.(3)

Local Labradorians, including Innu and Inuit, fear the impacts of methylmercury levels would destroy their traditional way of life. The Lake Melville study predicts these levels would rise by up to 200% because organic materials were never cleared from the flood zone. (4) Hunting and fishing is one aspect of this, but Indigenous people have known for hundreds of years that water is life, and if the water is poisoned, then all life that depends on the water will be destroyed.

To explain this further, once the methylmercury is consumed by fish, it enters the food chain and bioaccumulates, getting stored in fat at higher concentrations as it travels up the food chain.4 This means seals, which are an important part of Indigenous and non-Indigenous culture in Labrador, will contain high levels of mercury. According to the US Environmental Protection Agency (EPA), symptoms of methylmercury poisoning include impairment of speech, loss of peripheral vision and coordination of movements(5) , however the impacts on a child in utero are much more serious.(6)

There are also concerns about the potential collapse of the North Spur. CBC has explained, “The North Spur is a jut of rock and deep soil in the Churchill River on the north side of Muskrat Falls. The upstream side of the spur will take the full weight of the reservoir that will be created by the hydroelectric complex.” (7) If the North Spur were to collapse, an analysis done by the Town of Happy Valley-Goose Bay found that 250 properties, including homes and families, and 15 kilometres of road would be affected totalling at least $60 million in damage. The flood zone would also include the town’s water system, its wastewater treatment plant and the town’s hospital. It is also noted that the neighboring community of Mud Lake would be completely destroyed if the North Spur collapsed. (8)

Hydropower consultant and retired engineer Jim Gordon, who spent his career working on hydroelectric projects like Churchill Falls, has also raised major concerns with the steep slopes and soft clay of the North Spur. He has stated the project is “without precedent” and if it fails, there is a likelihood of the dam being out of commission for several years but more concerning is the potential loss of life.(10)

Despite Innu Nation Grand Chief Qupee having signed an Impact Benefit Agreement with Nalcor and the province, (11), (12) we believe this does not fulfill the United Nations Declarations on the Rights of Indigenous Peoples (UNDRIP) base requirement of free, prior and informed consent.(13) Grand Chief Qupee has demanded a full clearing of the reservoir, saying conflicting information about methylmercury levels were not included in negotiations.(14) They have since called on Nalcor to fully clear the reservoir.

On Wednesday October 19th, CBC News has broadcasted that the NL Government ordered Nalcor to “remove more forest cover at the Muskrat Falls reservoir”.(20) This is a small progress but it is required that Nalcor and the NL Government respect and adhere to the Indigenous and local voices of Labrador to respect our lands, animals, safety, and lives. This announcement does not satisfy the great need for transparency, clarity, and honesty, in adherence with UNDRIP.

For all of these reasons and more, we, the undersigned: