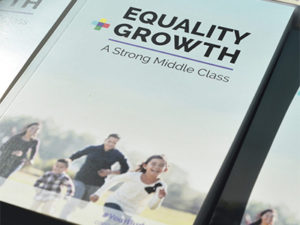 With its strong focus on gender equality and gender analysis, Federal Budget 2018 takes some significant steps forward in a number of KAIROS priority areas while failing to advance other critical concerns.

Building on last year’s contributions, Budget 2018 invests an additional $5 billion over five years in new funding in Indigenous communities, including for child welfare, housing, employment, water and health care. While these are critically important areas, some of this “additional” funding may be allocations from funding previously committed.  More details are required.

Of particular note is $1.4 billion in new funding over six years (part of the $5 billion) to First Nations child and family services described as Canada’s commitment “to fully implement the orders of the Canadian Human Rights Tribunal.” According to Dr. Cindy Blackstock of the First Nations Child & Family Caring Society, “if this amount is actually provided in future years, it could really give First Nations children a far better chance to grow up with their families.”[1] While this well-past-due commitment is welcome, we join with Dr. Blackstock and the Caring Society in being vigilant around implementation, focusing on real changes in the wellbeing of Indigenous families.

On the ecological justice front, KAIROS is pleased the government recognizes that women and girls are particularly at risk when it comes to climate change, and is committed to strengthening their voices at international climate talks by committing funding to training women climate negotiators.  KAIROS also appreciates Budget 2018’s reconfirmation of the government’s 5-year commitment of $2.65 billion by 2020 to help developing countries transition to low-carbon, climate-resilient economies.

On a less positive note, the budget makes no mention of fossil fuel subsidies, meaning no action has been taken to phase them out.  Federally, Canada spends approximately $1.6 billion on subsidies to the oil and gas industry. The government has pledged to fulfill its 2009 G20 commitment to phase out subsidies for the fossil fuel industry over the medium-term.  While some progress has been made, there is currently no clear plan in place to phase out the remaining federal subsidies.

The government is committing $1.3 billion over five years for land, water and species at risk, less than what it spends on fossil fuel subsidies.  This commitment, which the budget indicates is “one of the most significant investments in nature conservation in Canadian history,” threatens to be undermined by the continued approval of pipelines and oil and gas exploration.

At COP23, Minister McKenna announced the government’s plan to launch a Just Transition Task Force in 2018.  This announcement was made during the launch of the Powering Past Coal Alliance, a coalition of governments, businesses, and agencies committed to phasing out coal-fired electricity by 2030.  The Task Force would address the needs of workers in the coal industry and their families.  While the budget commits funding to the implementation of the Pan Canadian Framework on Clean Growth and Climate Change, it does not explicitly commit funding to this task force or to the just transition of affected workers.  There is an entire chapter in the budget on Skills for Tomorrow’s Economy, but nothing is mentioned or committed to skills for the renewable energy sector or training programs for transitioning workers in the coal, oil and gas industry.

Seeing the results of migrant justice lobbying efforts, KAIROS welcomes increased funding for a compliance regime intended to increase protection for Temporary Foreign Workers.  It will require vigilance to ensure this initial commitment to proactive enforcement and inspections is fully implemented.  The budget does not accelerate access to permanent status or create open work permits, although the latter are mentioned as a subject for further research.  Existing resources are used to establish, “a network of support organizations for temporary foreign workers dealing with potential abuse by their employers.”

The McLeod reports that this year’s additional $200 million for international assistance “will provide a bit of a boost,” however, given inflation and economic growth, Canada will fall back quite quickly to .26 percent of GNI. This is a far cry from the international standard of .7 percent.   While the Feminist International Assistance Policy commits to supporting grassroots organizations, the specific amount is not known.  Contributions to local grassroots women’s organizations translate into results that are effective, sustainable and transformative.

There is cautious optimism about the newly created independent Canadian Ombudsperson for Responsible Enterprise, around which KAIROS and civil society have advocated for over a decade in relation to the impacts of resource extraction on communities in the Global South.  Budget 2018 commits $6.8 million over six years, starting in 2017-18, with $1.3 million per year thereafter to ensure that Canadian firms operating abroad exercise leadership in ethical, social and environmental practices.  However, given the number of reports of human rights abuses and environmental damage, this investment in investigations relative to the anticipated complaint caseload may be inadequate.

With other human rights and ecological charities, KAIROS has been waiting for movement on modernizing charity legislation in Canada, particularly related to removing restrictions on advocacy-related activities, referred to as “non-partisan political activity”.  An expert panel made a very positive report in March 2017 but there has been no movement on its main recommendations. Federal Budget 2018 does signal the Government’s commitment to respond to those recommendations in the next months.  A Special Committee has been appointed by the Senate to look into regulation of charities; review of political activity restrictions may be within its mandate.

Finally, KAIROS welcomes the Budget’s overall gender-based analysis and the consultations with women’s leaders and organizations on development of the budget.  Although these are initial and small steps, an analysis of the gender impact of financial decisions is required to strengthen the struggle for gender justice in Canada and globally.

On a range of issues: Centre for Policy Alternatives