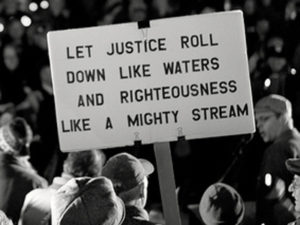 The system of the supremacy of whiteness was created to serve white men who were heterosexual, able bodied, Christian, wealthy landowners, to keep power and control in their hands. If we truly want to understand white privilege, the intersections of identity elements on which privilege systems are based and how each serves to support the others are an essential puzzle piece.

We understand lament to be a public acknowledgement, protest, complaint, crying out against the pain of grief, loss, misery and/or injustice. It is an active, ongoing process for overcoming denial, one which requires a sharing and naming of being in the depths. It can be an expression of anger, a release of energy, which involves the identification, naming and blaming of the enemy. It accepts the intricacies and identifies the complexity and interconnection of many different forms of pain and injustice.

The work that KAIROS does and the places of human shadows into which it walks reminds us to appreciate the work accomplished and to acknowledge that which remains. This ongoing, often faithful journey, confronts issues such as injustice and pastoral care, the charitable and the liberating.

It is a long walk that recalls for the scripture: But let justice roll down like waters, and righteousness like an ever-flowing stream (Amos 5:24).

The challenge, however, for most mainstream protestant Canadian experiences is that there is a very big elephant in the room. One that is so very pervasive, even ubiquitous, we are often paralysed as how to name it, need alone recognise it: White Privilege

As one KAIROS member, The United Church of Canada (UCC) began its own attempt to name and deconstruct it with our 1986 apology to our Indigenous friends, Sisters and Brothers. We have endeavoured to explore academic words like colonialism, Christendom, supersessionism, and Empire. Yet, as 2016 unfolds and the denomination finds itself in the throes of structural change, I suggest that this intellectual work and focus on structure and governance perpetuates the status quo. Until this information transforms into heart’s wisdom, we will flounder to move from a dis-eased call, in which we were complicit (as Settlers) in colonialism, to one that seeks reconciliation and collective liberation.

This is not easy work. We have endeavoured to bear witness during the Truth and Reconciliation Commission. Yet, in many instances, we have not translated this experience into our homes, our congregations. It is on the ground that we must begin to move from head to heart, body to soul, in order to integrate this work and recognise the challenge that our white church benefits from privilege and power.

This is not easy work. It is faithful work. We are invited to mutual healing, which requires recognising such atrocities as the 60s Scoop, the Residential School System, and treaties unhonoured.

But how do we do this?

How do we address guilt’s paralysis that privilege affords?

How do leave our homes when the world has moved on?

One that looks totally different than what we take for granted within the church?

There are no easy answers. Trauma theory helps to reclaim an ancient Judeo-Christian practice that witnesses the suffering in which we have been involved: Lament. Trauma theory reminds us that, for those who have experienced extreme pain and suffering, time is not linear. Reconstruction is often impossible. Resurrection only occurs when the Other’s dark night of the soul is heard and witnessed by those who listen. To listen is not an act of fixing, but witnessing: to witness becomes mutual when we realise our own unspoken pain, doubt and fears. For the Christian journey this is called Lament.

There are no easy answers. As KAIROS members attempt to follow, chase, long for the Spirit, we need reminding that even in Lament, when denial’s temptation sings, there is abundance. More pointedly, Lament throughout Holy Scripture is grounded in Creator’s radical hospitality and plenty. Whether it is the Psalms or Paul’s letters, we are reminded that in all human woe, God freely gives and we are invited to awaken to our role as co-Creators with Her.

This only begins, however, when all live with dignity unfettered. There can be no dignity unless Creator’s diversity is recognised and protected. Until elephants are named, privilege lulls those who have to perpetuate systems that construct others who do not.

* The Good News is that the spark Divine, which binds us, whisperingly rages for righteous deliverance from our collective bondage to systems of oppression.

* The Good News is that, though not easy, when those who have ears, listen, and those who have eyes, see, we recognise Spirit in the place of White Privilege. Then scales begin to fall and what a glorious awakening that was, is and shall be …

Richard’s family arrived from the Ottoman Empire in the mid 19th century during which European culture came into conflict with those in the Levant and specifically where the Silk Road intersected with the Mediterranean. Richard has journeyed with alternatives to the Canadian adjudicative judicial system & continues to endeavour to merge his practical conflict resolution & organisational development experience with appropriate theological & academic explorations. As well, he appreciates the nuances of organisational & systems analysis & approaches such endeavours by utilising such tools as Appreciative Inquiry & the Enneagram. In 2014, Richard continued his ongoing studies by beginning his PhD with The Taos Institute & Tilburg University. In this next journey of learning, he is endeavouring to explore the connexions between Social Construction & Practical Theology.