Spirited Reflection: What happened to “O Little Town of Bethlehem”? 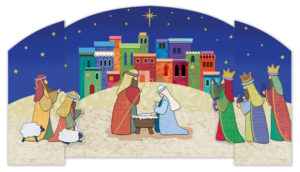 Micah 5:2 gives us the wording for our hymn – “Bethlehem Ephrathah, you are small among the clans of Judah, but from you will come for me one who will be ruler of Israel, whose origins are from of old, from ancient times.”

When Matthew writes many years later, he updates Micah’s words – “But you, Bethlehem, in the land of Judah, are by no means least among the rulers of Judah …” The difference is that Matthew is writing long after the birth of Christ, and Bethlehem has taken on new significance.

The new reality: Today Bethlehem is a major destination for tourists and pilgrims.

Yet in many ways it is becoming, once again, a little town, a diminished town. At the time of Jesus’ birth, as it is today, it was an occupied city. Back in the 1st century AD, the control of the Empire was evidenced by the census which led Mary and Joseph to Bethlehem from Nazareth. Today magnetic cards, cameras, facial recognition, and algorithms that search social media are used for surveillance.

Before the Six-Day War, in 1967, Bethlehem’s borders went from the green line (the green line refers to the border separating pre-1967 Israel from the occupied Palestinian Territories and constitutes an internationally recognised border), to the Jordan river, a total area of 658 square kilometres. Since that time, Bethlehem has been shrinking. Israeli settlements have been built in the southwest, where the land is fertile (Ephratha means fruitful. Ephrat is the name of one of the settlements). Other settlements are stationed along the Dead Sea where they can take advantage of the tourism and mineral wealth, despite the international laws against occupiers taking resources. And 20% of the land has been set aside for a nature reserve. Another chunk is deemed a military zone for security reasons. Bypass roads, which cannot be used by Palestinians, connect settlements to each other, again eating up the land. And the settlements keep expanding. There are now 19 settlements in the area around “the little town of Bethlehem” and 86% of the area is not under the control of Palestinians today. The total area of the city is now around 21 square kilometres.

The infamous wall, deemed to be necessary for security reasons, is not built along the green line but in from the green line, on Palestinian land. It is not a straight line. It winds its way around the city of Bethlehem, now blocking off three sides of Bethlehem from surrounding villages, with plans to complete the circle.

There are 29 checkpoints around the perimeter of the city. For Palestinians from nearby villages, visiting family, getting medical attention, travelling to work, getting produce to market, all are impeded by the dehumanizing checkpoints. As the Magi had their encounter with Herod when they arrived at the border, so the empire controls the borders, as is the case where two American congresswomen were banned entry to Israel last August, when their plans to visit Palestine became known.

There are 46,000 Christians living in the West Bank and half of them live in Bethlehem, a strangled city. Here there is an absence of freedom. There is no room to grow. There is no green space. Unemployment is the highest in the West Bank at 24.6%. All of these tensions lead to crime, to drugs and to an all-round deterioration of life. Some Christians see the only way forward is to emigrate. Remember the story of how Jesus, Mary and Joseph, the refugees, escaped to Egypt, to return later, when it was safe.

Rev Helen Smith is a retired Presbyterian minister, who recently served on the KAIROS Steering Committee, representing the Presbyterian Church in Canada. She was also part of the KAIROS church leaders’ delegation to Palestine and Israel in November.