Spirited Reflection: Transfiguration Sunday—From the Mountain to the Streets 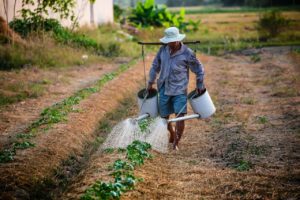 When Jesus took Peter, John and James up onto the mountain to pray, Jesus’ face and clothes became dazzling and bright. Then Moses and Elijah also appeared with Jesus, also in glorious splendor. When these Disciples witnessed this extraordinary scene, a voice came and said, “This is my Son, whom I have chosen; listen to him”36. They were astounded by God’s greatness. After the voice had spoken, they found that Jesus was alone, and they did not tell others about having seen this profound scene.

Mighty God, on the mountaintop you again revealed Jesus as your Chosen One. But your Chosen One did not stay on the mountaintop – he came down to continue his ministry of healing and teaching. Do not allow us to be complacent and stay in places of comfort when injustices still exist. Guide us to follow in Jesus’ footsteps and join in the hard work, seeking justice for all.

Sheldon suffered a head injury while working at a tomato farm. While he was unconscious, on life support, he was stripped of his work visa since he was unable to work, so he could no longer qualify for provincial healthcare. While Sheldon’s cousin living in Canada was able to fight that decision through lawyers, there was an immediate pressure to have him sent home to Jamaica. The pressure came from the Jamaican Liaison officer that is supposed to advocate for workers. Sheldon’s cousin says that workers are often pushed out to avoid compensation claims and damage to the reputation of the program. (CBC News, May 16, 2016)

The International Convention on the Protection of the Rights of All Migrant Workers and Members of Their Families is a detailed description of justice for migrant workers around the world. This United Nations Convention is the standard to which we should hold our country, our systems, our people and our actions. To date, Canada has neither signed nor ratified this Convention.

One of the major human rights abuses for migrant workers is the threat of deportation if they do not do whatever their employer asks. As Article 22.4 of this Convention states, before being removed, a migrant worker can have his or her case reviewed by the appropriate authority, and that pending such a review, the worker has the right to seek a stay of the decision of expulsion. This means that employers cannot simply send workers home if they complain or try to assert their rights, or if they are sick, injured, or pregnant. The worker has legal recourse. Unfortunately, many migrant workers do not know their rights or what to do if someone abuses these rights.

“Only 24 per cent of respondents injured on the job said they had made claims to workers compensation, and that almost half of all respondents said that working while sick or injured was common due to a fear of ‘employer reprisal or repatriation.’” (CBC News, “Migrant workers” February 7, 2012)

KAIROS and other advocacy organizations are working to help inform workers of their rights and improve access to support services, such as health services. We also need to educate our elected officials about the importance of ratifying this Convention and bringing Canadian laws and programs in line with this standard for human rights protection.

Almighty God, lover of justice, help us establish equity and justice for all people in our world. We give you thanks for the hard work in bringing such documents as the “International Convention on the Protection of the Rights of All Migrant Workers and Members of their Families” to life. Uphold us to call on Canada to sign and ratify this convention and to practice fairness and justice with all, including those who come to help us by working in Canada.