Spirited Reflection: The time to act for justice is now 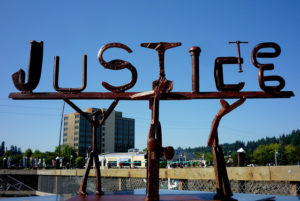 Sculpture by John Vanek. Photo by Jason Taellious via Flickr

Sculpture by John Vanek. Photo by Jason Taellious via Flickr

Jeremiah was one of the Hebrew prophets who insisted that living in right relationship with God was not enough. They knew that because the root of spiritual life is embedded in a relationship between people and God, it’s easy to begin thinking that our spiritual life is only something personal between God and us, – a private thing to be nurtured by prayers and spiritual readings that comfort and inspire. We can start thinking that what goes on in the world, or how we treat others whom we don’t like, or who don’t like us, is less important.

Again and again prophets — Isaiah, Jeremiah, Micah, Amos, and Zephaniah — intervene to insist that if we are to find favour with God, we must also live in right relationship with people. In fact, they went further and insisted that for worship to be acceptable in God’s eyes, it must be accompanied by action for justice.  Traditionally, Christian churches have addressed poverty and human need through acts of charity. Charity born of compassion and kindness is vital, but justice is more than that. “Justice” means working to replace the structures and policies that result in oppression and exploitation of people and the Earth with new ones that restore God’s sacred balance in Creation.

The ancient Hebrews recognized that over a period of time, humankind’s sinful nature gives rise to inequity in societies. So they developed the concept of the Jubilee Year, set forth in the book of Leviticus as one of the rules the Israelites were to live by when they reached the promised land. God instructed Moses that every 50 years, the 50th year was to be declared a Jubilee Year.

Jubilee embodies two principles: 1) Everything in creation — especially land and wealth — ultimately belongs to God; and 2) God’s creation is abundant – there is enough for everyone’s needs if the Earth’s resources are distributed equitably. During Jubilee year, debts were to be cancelled, indentured servants or ‘slaves’ were to be freed, and land returned to its original owners or their families who had lost it because they had fallen into debt. But that was not all: the slaves set free were to be given resources, i.e., wealth, so that they could make a new beginning.

‘Good news to the poor’, ‘freedom for prisoners’, `release of the oppressed,’ `the year of the Lord’s favour’; Jesus was calling forth a time of Jubilee, a new beginning where the distortions and inequities that had crept into society were to be eliminated, and justice re-established. But when he announces, “today this scripture is fulfilled in your hearing”, Jesus proclaims that he is ushering in the beginning of God’s Kingdom on Earth, a Kingdom characterized by peace and justice.

How did Jesus go about justice work? We know that he associated mostly with the poor and performed acts of healing born of compassion for the sick and the grieving. But he also challenged rules and customs that emphasized ritual purity over compassion and human wellbeing. He challenged the patriarchy that denied women their right to participate meaningfully in society. He challenged Jewish discrimination against Gentiles by teaching that Jews and Gentiles were equal in God’s love. And Jesus repeatedly challenged and resisted the violent domination system of the Roman Empire in which the Jewish king, the chief priests, scribes, and elders of the Temple in Jerusalem were active participants.

This season offers a time to take an honest look at our world and compare the reality to the vision of what the world would look like if Christ reigned.

Ecological justice, as well as social justice, is urgently needed. In fact, the two are interdependent.

Justice work is at the core of who we are as Christians. KAIROS: Canadian Ecumenical Justice Initiatives, was formed in 2001– a Canada-wide coalition of 10 Christian churches and religious organizations, uniting Canadians in faithful action for Justice —social justice, climate justice, human rights. KAIROS is a Greek word that signals a time of crisis and new possibilities, a time of repentance, renewal, and decisive action. Every time we read the signs in our world and see injustice, the very meaning of faith is at stake in our response. Recognizing kairos means acknowledging that the time to act for justice is now.

KAIROS Canada currently has four programs of action for justice:

And the good news is that bold climate action globally can deliver $26 trillion dollars in economic benefits between now and 2030, while generating 65 million jobs, and avoiding 700,000 premature deaths from air pollution.

The world’s governments are gathering at the UN COP 24 in Poland now to discuss targets and timelines. I encourage you to contact Canada’s political leaders (Minister of Environment and Climate Change, Catherine McKenna: ec.ministre-minister.ec@canada.ca). Tell them we want Canada to commit to what the Intergovernmental Panel says we must do: Cut Greenhouse Gas emissions 45% by 2030 and become carbon neutral by 2050.

I leave you with this thought: Our generation is the first in human history to experience climate change; it is the last generation to be able to do something about it. But we work in community, and we know that God is with us.

Anne Morris is a long-time peace and justice activist, and currently co-chair of the Salmon Arm Ecumenical KAIROS Committee.