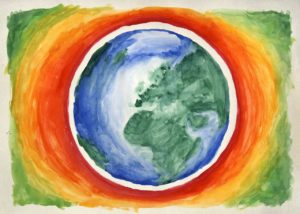 This is now the effect of the repeated and ever more ominous warnings from scientists over the past thirty years concerning effects of the accumulation of greenhouse gases in the atmosphere. The reality outlined in their studies has also been brought home to many through experienced calamities: fires, floods, droughts, storms – and a tide of desperate refugees.

Children now point out that the Emperor has no clothes: that ruling powers in finance, corporations and governments have failed in their most basic obligation, to respect and cherish life. The Security Council of the UN presides over planetary insecurity, insecurity visibly deepening through climate change, still deepening in spite of climate conferences and agreements such as the Paris Accord of 2015.

Churches share at some level in an awakening to the realities of our global situation, more often to the symptoms rather than the causes. Churches are also complicit in the death machine our global economy has become.

How did we get here?

We may assign the cause of our situation to human nature –this would be an evasion. We may look historically at the industrial revolution and the growth of socially irresponsible industries that produced wealth while degrading the biosphere and destroying human beings. More relevantly, we must understand the powers operative in ‘globalization’, especially since the 1970’s. Behind the expansion of extractive industries, the oil economy and the global extension of  a consumer society we observe the operations of an increasingly deregulated financial system guided only by the appetite and a fallacious economics that is ‘value free’.

As exhaustively documented and analysed by John McMurtry, unleashed money demand has become a cancer, boiling up in bubbles of wealth while destroying vital systems and sapping the energy of societies to make the changes that might save communities – and the planet as a home for humans and other species (The Cancer Stage of Capitalism, from Crisis to Cure, 2nd ed., 2013).

We are in crisis. Earth’s living systems have suffered catastrophic loss: a reported 60% of animals, birds, fish and reptiles since 1970. While there are signs of awakening around the earth, the drive toward extinction continues, as a movement begun in Britain correctly witnesses.

Rowan Williams, the former Archbishop of Canterbury, in an Afterward to a booklet published by the Extinction movement (This is Not a Drill, 2019) sees what, for Christians, is at stake: either a continued drift or a re-engagement with life around us, indeed, with “the life-giving Word who is to be met in all things and all people” (p.182).

Christians are recalled to basics. How is it that the central impulse toward compassionate sharing has so often been left, over the centuries, to people more or less on the fringes of the Christian movement? ‘Works of charity’ are assigned to special agents while church authorities fail to question life-suppressing, socially-irresponsible policies in government or in the economy. Where is the penetration of lies that mask the face of a system that is not about sharing but about accumulation of wealth without regard to consequences?

The Rev. Dr. A. Frank Thompson is Professor Emeritus of Religious Studies at the University of Waterloo and a retired Anglican priest.