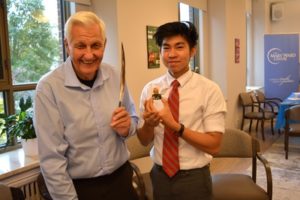 The erroneous mainstream view of Indigenous peoples as being one indistinguishable group across North America with misguided and superstitious spiritual beliefs is summed up in the term Indian. When the damage done to Indigenous cultures by the reservation system, the residential school system and the making of our spiritual practices illegal is added to the widely held stereotypical view of the Indian, it is understandable that many misconceptions about Indigenous spirituality, including its uniformity and invalidity, continue to exist.

The expectation that an elder, any elder, is a source of incontestable knowledge concerning Indigenous spirituality and ceremonial practices is widely held. As a result I am seldom surprised when I, as a Pipe Carrying elder, am asked to explain Indigenous spirituality. That I cannot do. The best I can do is explain the point of view that I am familiar with and warn everyone that it is not universal.

No better and no worse

If I, as a human being, can have a soul or spiritual essence and I am no better and no worse than anything else on Mother Earth, how can I believe that I am the only one? The creatures around me share so many of my characteristics that I am forced to see them as being equal. One needs only to watch a sparrow patiently feeding her young to see how widely the motherly instinct is shared. If an animal gives up its life to nourish me, it seems appropriate that I should acknowledge its spiritual essence with an offering of tobacco.

On the other hand, death itself is another shared characteristic. In this respect I am no better and no worse than the animals, the birds, the plants and certainly the people around me. Even as a Pipe Carrying elder, I do not have incontestable answers about life after death, but when someone passes away I share a need to come to grips with it. In my corner of the world, it is believed that we are born in the east and pass out through the western door and that an elaborate Pipe Ceremony will facilitate the passing. The precise steps taken to deal with a passing vary according to the Indigenous culture involved, but may be considered to be no better and no worse than those of any other culture regardless of origin.

Through KAIROS, I have served as an Indigenous elder in Christian, Jewish and Muslim organizations and have come to recognize that while we may deal with problems such as death in different ways, we are all human. In the end, it is my conviction that our different cultural approaches to spirituality do not mark Indigenous peoples as being misguided. They simply affirm that as humans our fundamental spiritual beliefs are no better and no worse than those of any other cultural group and are therefore just as valid.

Bob Phillips (Great Bear) is a non-Status Urban Mi’kmaq.  Although a traditional Pipe Carrier, Bob is also very contemporary and holds a PhD in Indigenous Studies from Trent University and an MA in Fine Art History from York University. Bob Phillips also spent ten years as host of the Aboriginal Voices Radio Arts Review show discussing art, culture and contemporary issues with community members from across Canada and the Far North.