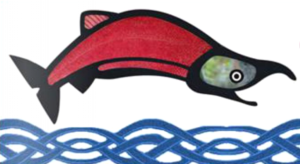 Lent is about taking time to look at what lies heavy on our hearts. To acknowledge these things and then reflect on the ways in which our lives could change to create space and opportunity for new perspective and renewed life. For new ways of being in relationship with all that sustains us.

I have much that lies heavy on my heart these days. Climate change and loss of species are big ones. Recently 1500 children and young people from Victoria and over a million from around the globe spilled out into the streets on a Climate Strike to take action about climate change, saying that if the adults won’t take action, they will. They too are crying out and sharing their grief and awareness that scientists world-wide have given us a short 10 years to make enormous changes to how we live. Already we are seeing the impacts and the change. Are we paying attention? Wake up –the young people say.

Specifically, to the salmon I pay attention.

My lament and grief is for the salmon.

I learned a song many years ago when my husband and I first came to the west coast in 1980…. I love it. The chorus goes like this….

And the Salmon Circle from the Sea to the Sea

Up the Rivers of life, endlessly

And they always return

to the place they were born

Fraser Lang wrote that song. I marveled as a person new to the west coast when I heard this song that describes salmon always returning to the place they were born – even if that means they need to travel over 1000 kilometres up the Fraser River to get home. Fraser and others who lived near Lillooet, up the Yalakum, Seton and Bridge River watersheds – became our friends. Some of those friends including Fraser had a band named Zumac. I didn’t know then that the band’s name meant “salmon” in the language of the Lillooet peoples. I am grateful to these friends for many valuable lessons.

How do you see your primary relationship with salmon? Is it only food from grocery store or something for the Barbecue? Salmon – Chinook – Humpback – Spring – Chum – Sockeye – Zumac

Salmon are an essential life force on the coasts of Vancouver Island – on the entire west coast of North America. Yes – salmon have provided much food and economic gain for the humans along our coastline. They also are part of a rich cycle of life that feeds and nourishes our entire ecosystem.

Salmon are a part of the sacred cycle of life here. I have come to love the salmon. They are a metaphor to me of lives full of challenges and upstream battles. Yet they continue…

My tears run and my heart breaks open for the mother whale that carried her dead baby with her for over two weeks before letting it go. The killer whales are starving. My grief spills over each time I hear of logging and mining “incidents” where ancient homes and birthplaces of salmon are destroyed. Why do we even flirt with the idea of adding hundreds more tankers filled with bitumen to ply our coastal waters? These coastal waters belong to the salmon too. I believe that my lament – my tears – for the salmon and for lost habitat – are not mine alone. The children grieve too – perhaps for the salmon that they know might not be there when they are adults. I know that is why I make a point of bringing our grandson to see the salmon when I can.

We cannot live alone – in isolation from that which surrounds us and is part of the web of life. We are part of the web – just as the salmon are – our relationships with each other are sacred. I believe that our Creator – nourishing Mother God – created all creatures – including humans – to live in harmony and in a sacred relationship with all else. Not to live apart. We humans are capable of many amazing things – we have all the tools we need to make the right decisions and do the hard work to turn our greenhouse emissions way down and mitigate as much as possible future climate changes.

My hope is – that as the salmon are able to make the journey hundreds of kilometres upstream –we humans move from inaction into action. Knowing that it is ‘our actions’ that have created this situation and we must act now to change them. Can we all stand up for what we love? The salmon and our future depend on this.

Janet Gray lives on the unceded territories of the West Coast Saalish Nations and has served with dedication as the KAIROS BC/Yukon regional representative for seven years. KAIROS is deeply grateful for Janet’s contribution, providing leadership at many social justice events, Circle Gatherings, Walking in a Good Way in Victoria and the Rolling Justice Bus.