Spirited Reflection: One thing I do know, that though I was blind, now I see 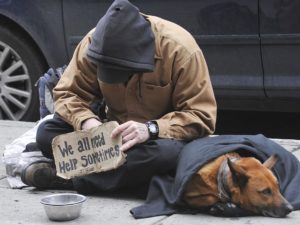 Two readings for this Lenten season coming to mind, about seeing and vision:  Psalm 121, I lift up my eyes to the hills; and the story of the man born blind that is in the ninth chapter of the Gospel of John.

My eyes have been opened twice.  The second occasion was when we had a tent city on the lawn of the Church.  The emergency shelter had suddenly closed, and the residents were being evicted from a park down the street from the Church.  In a matter of minutes, we had 25 tents on our lawn.  The issue of homelessness was parked on our front step, which is across the street from city hall.  As I was mixing among the residents someone drove by and shouted to them “get a job”.  That man had not lifted up his eyes to see things differently; he reduced the many issues of homelessness to one solution.

Homeless people are forced to see the world through the lens of survival and safety:  their lives literally depend on it.  When we lift up our eyes to the embarrassment of homelessness, we see a bigger picture: health issues, domestic violence, lack of skills are only a few of the issues that force people onto the street.  We white, middle class, comfortable people are too eager to impose our values from the comfort of our homes, and the certainty of our moral authority.  And to add insult to injury in our generous benevolence we insist upon shelter beds, rather than building accommodation that offers dignity and autonomy.

I had the opportunity to hear stories, and to see the world, if only briefly, through the eyes of the homeless.  For the most part they built a community and cared for one another.  As autumn approached and the nights were getting cooler, we had to ask them— for their safety—to find alternate accommodation.  My heart was warmed by the outpouring of support and generosity extended to our guests, and I was moved by the response of the wider community to show caring and compassion. “I lift up my eyes” gives us the bigger picture.

Some years ago, was the first time I had my eyes opened.  I had cataracts removed and powerful implants were placed in each eye.  I had been very near sighted— and prior to my surgery I saw the world through very thick and strong lenses.  I assumed that was how everyone saw the world.  I didn’t know it at the time, but the thickness of the lenses distorted how I saw the world.  I have never had such visual acuity as I do now.   With the distortion greatly reduced, my visual vision was no longer the issue it once had been.

But my moral vision needed to be retooled to see how the homeless see the world, how women and people of colour see the world, and how the LGBT community sees the world.

We need to lift up our eyes beyond our experiences, beyond our own situation, and follow the sight and vision of the disenfranchised.

Don Uhryniw is the clergy type at Emmanuel United Church, Peterborough.  He has a long history of caring for the marginalized.