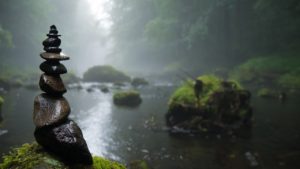 Periodically, over the years, I’ve asked myself this question, ‘What difference does being a Christian make for me?’ How am I living out my Christian Faith? I suppose that, on paper, it might look something like this:

contributed financially to the work of the church – ✔

helped with some Outreach projects – ✔

But if we were to leave it at that, we’d miss the mark, wouldn’t we? For our actions don’t wholly define us as Christians.

Every year at this time, we read the story of Jesus’ baptism.

‘When all the people had been baptized and when Jesus had also been baptized and was praying’, says Luke, ‘A voice came from heaven saying, “You are my Son, the Beloved; with you I am well pleased.” Jesus the Messiah. Named & Claimed by God.

Luke is a doctor by training but a historian by passion. His scripture shows us that Jesus is the fulfillment of God’s plan of salvation for the world and God’s in-breaking of love. And that changes everything. Although centuries remove us from Jesus’ baptism, we are also recipients of God’s promise made incarnate in Jesus. Named & claimed as beloved children of God. God’s love is Unconditional – it’s Radical.

We are invited into the waters of the Jordan River, so to speak–to let our identity as Beloved Children of God seep deeply into our souls. And this scripture of Jesus’ baptism should have a profound effect on our lives. Claiming our Identity in God is bound to change us. How can it not?

This Facebook message recently caught my attention: “As the world fights to figure things out, I’ll be holding doors for strangers, letting people cut in front of me in traffic, saying good morning, keeping babies entertained in grocery lines, stopping to talk to someone who is lonely, tipping generously, calling you by the name on your name tag, waving at police, sharing food, giving children a thumbs-up, being patient with sales clerks, smiling at passersby as often as I am provided the opportunity, and buying cups of coffee for strangers.” “Why?” “Because I will not stand idly by and live in a world where unconditional love is invisible.”

Our church has always believed in Living Faith in Action. We believe that we’re called to participate in God’s work of loving justice in the world. And as a result, we have been at the forefront of some powerful movements that have helped to shape our country:

(1) In the case of the Indigenous peoples of Canada, the United Church of Canada was once a big part of the problem. Now, the Church is responding to God’s call to do a New Thing in the world. We as a Church and later a nation began to openly admit to our wrongs; we’ve begun to understand what it means to ask forgiveness; and we’ve begun to partner in the long process of Healing.

(2) In the case of those who claim gender identities other than male or female, the United Church of Canada was once part of the problem. Now, the Church is responding to God’s call to do a New Thing in the world. We’ve begun to open our doors more widely: as a Church, we invited those who identify as gay or lesbian or queer to openly be members of the church and eligible for ordination; as a nation, we eventually legalized gay/lesbian marriage; as a congregation, we earned the designation of an Affirming Congregation. We hosted the Affirming United Conference and hosted a wonderfully unique wedding for our recent refugees. God’s love and Grace is amazing.

(3) In the case of protecting all of God’s creatures, the Church was once part of the problem, asserting domination over the natural world. But for the past 40 years, the Church has been responding to God’s call to do a New Thing. For decades, the Church has recognized that humans are out of balance with the rest of creation, and that we need a more harmonious and sustainable relationship with the earth and its creatures.

According to National Geographic, if Jesus were to plunge into the Jordan River today, he might well injure himself! The once great biblical waterway is now described as little more than a shallow, unimposing trickle of “sludge, a murky body of water that is in danger of withering into nothingness”. Many factors are at play: raw sewage and industrial run-off; the diversion of water to the desert to bolster tourism; political infighting, short-term thinking.

The Jordan River is just one example. What about the earth’s oceans? The atmosphere? The rainforest? Endangered species?

What will it take for us to live in balance with the rest of Creation? A recent headline in the Globe and Mail, asked ‘Why Don’t we Care about Climate Change?” Author Dan Gardner concludes that it’s due to our ‘psychological distance’ from the effects of climate change. Climate change hasn’t yet become an ‘emotional’ issue.

The Church has a key role to play here. For we, as Christians, believe in a God who is ‘reconciling and making all things new’ through the power of the Holy Spirit’. Knowing God’s Glory on earth AND experiencing God in nature – with awe and wonder – when we hike in the forest, walk in the mountains or stand on the shores of Lake Ontario – makes all the difference. If, as Gardner says, ‘psychological closeness’ and ‘emotional attachment’ is the answer, then aren’t we, the Church, ideally situated to Make a Real Difference?

So—what difference will the fact that we’re Christian make this year? Named and Claimed, will we Trust in God and listen for the breath of the Spirit in our lives – personally, as congregations and as a Church? God so loved the world—will we ‘so love the world’?

Catherine McPherson attained a Master of Divinity from Emmanuel College in 2015, following a career as a lobbyist and writer in the field of international trade. Catherine works with children and youth at Royal York Road United Church in Etobicoke, Ontario.