Spirited Reflection: Jesus outside the gate 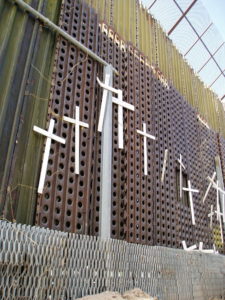 On June 7, in what is likely to be his last meeting of the KAIROS steering committee as a representative of The United Church of Canada, Jim Hodgson, shared this reflection.

In this reflection, I am inspired by Mary Pezzulo’s recent Steel Magnificat blogpost: https://www.patheos.com/blogs/steelmagnificat/2019/06/9126/

The stories of the life of Jesus always have the capacity to surprise me. I also find that I do not move quickly through liturgical seasons. As many in the Christian tradition moved toward Pentecost (which was celebrated June 9), I was still stuck back in readings from the celebration by many Christians of the Feast of the Ascension a week or 10 days earlier.

Then he said to them, “These are my words that I spoke to you while I was still with you—that everything written about me in the law of Moses, the prophets, and the psalms must be fulfilled….” You are witnesses of these things. And see, I am sending upon you what my Father promised; so stay here in the city until you have been clothed with power from on high.”

Then he led them out as far as Bethany, and, lifting up his hands, he blessed them. While he was blessing them, he withdrew from them and was carried up into heaven. And they worshiped him, and returned to Jerusalem with great joy; and they were continually in the temple blessing God.

On Palm Sunday a few weeks earlier, we heard that Jesus entered Jerusalem on a donkey. Days later, he was arrested, tried and then dragged outside the gates of the city, to where unclean and profane people were taken to be executed.

In the Ascension gospel reading, we hear that Jesus did not ascend to heaven from Jerusalem. He led his apostles out from the city, all the way to Bethany. He blessed them. And as he blessed them, he ascended into heaven to make the way for all who suffer outside the many gates, borders, walls and other obstacles that we encounter in our journeys. That blessing is ongoing to this day.

We have recently heard the stories and recommendations of the Final Report of the National Inquiry into Missing and Murdered Indigenous Women and Girls. I grew up in a place and a time —the unceded territory of the Okanagan First Nations in the 1970s—and perhaps with a certain sensitivity that made me aware of the disappearances and murders along the “Highway of Tears” in the northern part of my province, and from the downtown east side of Vancouver. One of my neighbours growing up was George Ryga, author of The Ecstasy of Rita Joe. This play, first performed in 1967, described a reality that faced Indigenous women long before it had an acronym.

I think too of how 15 years and more ago, our KAIROS colleague Rachel Warden and I began to hear through our friend Lilia Solano about disappearances of teenage boys and sometimes girls

from the barrios on the edges of Bogota and other Colombian cities. Then later, their bodies would turn up, the army saying that they were guerrilla fighters killed in combat. They came to be known as the “falsos positivos,” the false positives—and their murders and the lies about their deaths continue to shake Colombia’s political establishment to this day. More than 2,000 victims identified to date.

It’s only by going outside the gate, or in my hometown, by crossing the bridge to the reserve, by listening carefully to those who are supposed to be silent, ordered to be silent, do we hear the truth about the individual lives taken and the investigations never undertaken.

Working together in partnerships in KAIROS and beyond, we are called to action, called to justice. Those calls represent opportunities to transform how we live together on this land, and the ways that we live that affect others in other lands.

And in following Jesus outside the gate, outside the conventions of our traditions and institutions, we encounter blessings as we hear and respond to new calls and new truths.

Jim Hodgson is the Latin America/Caribbean Program Coordinator at The United Church of Canada. With a huge thanks from KAIROS for his dedication, he has served on the KAIROS Steering Committee since 2012. He dates his involvement in Canadian ecumenical justice coalitions to participation in Ten Days for World Development in Kelowna in the late 1970s.