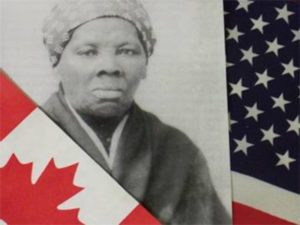 Peter Haresnape has written a Bible Study Resource for Black History Month 2018 for those who, like him, are seeking to be allies to people of African descent.

Following is his reflection shared earlier – in honour of Black History Month and of Feb 20, World Day of Social Justice:

I met Ada in the sanctuary of the small chapel on Geneva Street in St Catharines, Ontario. I was the only white person, and I’ve already learned so much from this group comprised mostly of people of African descent, living in the US and Canada, exploring the history of the Black community in St Catharines. Ada is our guide to Salem Chapel, of the British Methodist Episcopal Church. While it primarily functions as a church, Salem Chapel does not shy away from its history as one of the oldest Black churches in Ontario. It demonstrates the long and rich local history of people of African descent, amidst a culture that can forget that white people aren’t the only ones with history in Ontario.

As Ada took us around, she shared stories of the place and the people, and the current difficulties of upkeep. She talked about enslaved Africans escaping the USA through the Underground Railroad, assisted by women like Harriet Tubman, who lived for several years nearby and worshipped at the chapel. Ada described groups coming from all over the US and Canada to visit this chapel, descendants of liberated former slaves celebrating their history. She showed us the doll made and donated by one of those visitors, dressed as Harriet Tubman and toting a large rifle. The rifle was quite a shock!

“Some people don’t like to see that rifle in the church”, she shared with us. “It’s only out for visitors. The rest of the time I keep it in the room where the minister changes.”

When I took a closer look, I read the note on the doll:

‘A Black female soldier and brilliant escape strategist – As Tough as Leather, As Heroic As Moses. She endangered her life continuously to successfully escort over 300 slaves to freedom through her knowledge of the Underground Railroad. She wouldn’t hesitate to shoot anyone who endangered her safe journey. Large rewards were offered for Ms. Tubman’s life, she was never captured, and she never lost a passenger.’

I will be honest – I did not like that rifle. When I saw it in the church sanctuary, I was shocked and discomforted. My Christianity rests on the prophetic vision of a Good News world where weapons are recycled into farming tools. But for Harriet Tubman and the people she safeguarded over the border, her rifle was Good News, and for those who would have endangered their safe journey, it was Bad News.

My discomfort at that gun, based on my personal and mostly abstract notions about violence, does not really register in context. Enslaved Africans did not need religion telling them that suffering in life was rewarded by treasure in heaven. They did not need a God that ordained the place of slave and master. What they needed was a vigorous woman with a map in her head and a gun in her hand. That is what Good News looked like. Good News rejects the false narrative, the religion of those that lay heavy burdens on the shoulders of others, the Bad News of a God that condoned slavery.

In Matthew 23, Jesus speaks out against the scribes and Pharisees for their oppressive behaviours and focus on outward marks of righteousness, regardless of the wellbeing of their fellows. It was Bad News for the Pharisees, but Good News for Jesus’s friends. Things would be different – they would see the humble exalted and the exalted humbled.

We have to acknowledge the weird reality that Ms Tubman went out as a Christian to rescue Christianized enslaved Africans from the clutches of Christians, bringing them back to this vibrant Christian community in St Catharines. I see her actions in the light of Jesus’ words, as liberation and a new way of being. I know that I am in no position to cast judgement on her methods. It is my responsibility to learn this history and see what I can do in this day and age to continue the work of liberation.

It’s so important that Salem Chapel preserves this history for the future generations. At the moment they continue to seek community support to carry on their work. Black History is part of Ontario’s history, and recognising the heritage of Christian liberation and anti-slavery activism is essential to building a more just future.

Peter Haresnape is the General Secretary of the Student Christian Movement of Canada, an ecumenical justice-focused movement that works with students and young people to put into practice the liberating faith of Jesus.