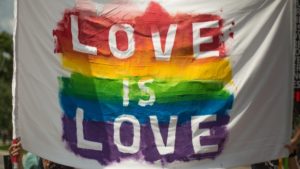 We live in a culture where there are many different types of time: chronological or calendar time; justice time(“that should have happened years ago”); convenient time(“when I get around to it”); “when the time comes”, fantasy time; “there is no time like the present”.

The month of June has seen the beginning, in this country, of widespread Pride celebrations: where folks have gathered to celebrate the diversity of sexual expressions. It is a time of colour, energy, community. We, in the Church, may have some things to be proud of, but our embrace of the Rainbow Community has not really been one of them. Some years ago when I was walking in the Pride parade in Moncton I was wearing my clerical collar (something I do not often do). A woman watching from the sidewalk was incensed that I was walking in the parade; she couldn’t believe that a disciple of Jesus would take part in a celebration. That is a legacy of the Church which we must address.

When I began Divinity studies in 1986 the issue of the ordination of gay and lesbian folk was consuming the United Church of Canada. It was one of the hottest issues that the United Church of Canada had ever dealt with since its formation in 1925. I regularly heard from my classmates, “the people aren’t ready for it”, to which my reply was, and is, “I think gay and lesbian folk are ready for it”.

Or, to put it another way, I heard “the time is not right”. Well the time, the kairos, has long passed for us to deconstruct the heterosexist patriarchal structure that entombs us. I strongly believe that it is time for people of faith to walk, to march, to celebrate the diversity of Holy creation. Even though affirming and inclusive communities, processes and policies have been adopted across the country, communities’ attitudes have not necessarily followed. Even though inclusive language has become part of our lexicon, resistance to this inclusive language comes through too often. It is time that we, like Jesus, speak the truth to power, destructive power, and that we confront white privilege of economic advantage.

While we begin and live through this process, we will, perhaps only a little, realize the evil that hate is: that which creates refugees; classes; colours; uniformity. The beast that is intolerant of sexual diversity is the same beast that names one person better than another.

I write all of this as a straight, white, man of privilege. I also write this in the response to that question: “what would Jesus do”. The time has come.

Rev Don Uhryniw describes himself as “the clergy type at Emmanuel United Church”, Peterborough, Ontario, involved with justice issues for a long time.