South Sudanese women to share their fight against gender-based violence 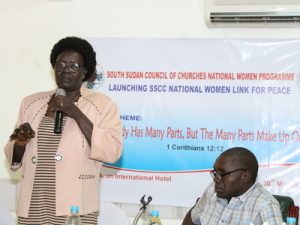 KAIROS is looking forward to hosting two South Sudanese women in Canada in late fall 2017 to share their fight against gender-based violence (GBV) as part of the No Mas II tour.  The educational tour between November 24 and December 10 will feature two representatives from the South Sudan Council of Churches (SSCC) National Women’s Programme (NWP), a KAIROS funded partner, including Agnes Wasuk, Coordinator for the SSCC-NWP, and colleague Awak Deng.  “The tour coincides with the 16 Days of Activism Against Gender-Based Violence which begins on November 25, the International Day for the Elimination of Violence Against Women, and end on December 10, International Human Rights Day.  This is the second No Mas tour. Last year’s inaugural No Mas tour featured Isabel Caicedo Polanco of the Organización Femenina Popular, a Colombian grassroots women’s rights organization and KAIROS partner.  You’ll read more about the No Mas II tour in upcoming editions of KAIROS Times and on the KAIROS website.

South Sudan is at a critical juncture.   The upsurge of conflict in the country since December 2013 has gravely challenged women’s lives. The civil war in a complex political situation has threatened the core fabric of the country, traumatizing people and destroying lives and property. This has resulted in the displacement of millions of people, sporadic killings, and human-made famine as entitled-feeling former rebels fight for influence over ethnic constituencies and limited oil revenues.  An estimated 60,000 South Sudanese have been killed since the recent civil war erupted, with some two million internally displaced persons inside the country and another two milllion refugees haveing fled to neighboring countries.  The South Sudanese-Canadian diasporic communities can have constructive influences on their homeland by, among other things, bridging ethnic divisions for the greater good of South Sudan.

The SSCC-NWP is part of a larger KAIROS Women of Courage program on women, peace and security.  Through this program KAIROS works with five partners in five countries in the global South.  In addition to SSCC-NWP in South Sudan, KAIROS works with:  Organización Femenina Popular in Colombia; Héritiers de la Justice in the Democratic Republic of the Congo; EcuVoice in the Philippines; and, Wi’am in the West Bank.   Through this program,  KAIROS  partners, women’s organizations and women human rights defenders (WHRD) work at the community level with individual women victims and survivors, as well as nationally and internationally through women’s rights organizations, networks and coalitions, to achieve:

The tour plans stops in Toronto, Kitchener-Waterloo, Thunder Bay, southern Saskatchewan, Montreal, and Ottawa.  Our South Sudanese guests will speak at public events, churches, with South Sudanese-Canadian diaspora groups and Indigenous communities, MPs and government, and to civil society partners including from the Women, Peace and Security Network – Canada.

KAIROS supports and works with the National Women’s Programme (NWP) of the South Sudan Council of Churches (SSCC), having supported the Council and its predecessors for several decades.  The NWP is also supported institutionally by the Fellowship of Christian Councils and Churches in the Great Lakes and Horn of Africa (FECCLAHA), another KAIROS ecumenical partner based in Nairobi, Kenya.  The SSCC-NWP is a viable, impartial, respected partner on the ground that has demonstrated its capacity to rise above ethnic divides as a recognized moral authority that deserves a meaningful role in peacebuilding and ongoing peace processes. KAIROS is engaged in assisting the SSCC-NWP in addressing the underlying issues around peace building and gender justice in South Sudan.

The SSCC came into existence in 2013 with the independence of South Sudan and its split from the Sudan Council of Churches.  It is an ecumenical forum of South Sudanese Catholic and Protestant churches.  The mission of the NWP is to raise the voice of women, bridge the societal gender leadership gap , strengthen women’s skills and knowledge in peace building, and build their capacity to participate in decision making at all levels.  The NWP worked with United Nations Women after the December 2013 crisis to organize the women of faith national conference in July 2014 and facilitated NWP workshops on UNSCR 1325 for church women in 2015 and 2016.  The United Nations Development Programme recently supported the NWP to celebrate the International Day of Peace in six states of South Sudan.

In this post-independence era, South Sudan’s socio-economic development has been significantly hindered by episodic bouts of conflict and violence, largely ethnic/tribal in nature. From December 2013 through July 2016 in the capital of Juba alone, women have been disproportionately impacted by the conflict and unrest. Many have lost husbands and children and have been directly subject to killings, rape, torture, looting, robbery and destruction of property. The NWP is addressing the specter of women’s suffering through the following programme components, building on substantive work in the greater Malakal area of Upper Nile State and Juba Country of Central Equatoria State.

The SSCC- NWP has designed a peace building plan based on data gathered on the ground in conflict areas in South Sudan. The Action Plan for Peace developed in Kigali, Rwanda in June 2015 by the SSCC, and supported by the World Council of Churches, which has a 40 year history of supporting peace efforts in Sudan and South Sudan working with Sudan’s and South Sudan’s churches, has three pillars:

Advocacy: The SSCC and NWP is engaged in influencing the leaders of the conflicting parties and the Government of South Sudan to work more assiduously for peace, especially focusing on women leaders who are regarded as important agents for change.  This involves pushing for greater engagement of women’s voices in formal peace making negotiations and peace keeping monitoring.

Creating safe spaces:  The SSCC and NWP is involved in making effective use of the churches’ neutrality and natural orientation toward peace building to leverage the churches’ affinity for truth-telling and promoting forgiveness and reconciliation among women through special events.   The NWP is finding ways to bring stakeholders together in a less politically charged atmosphere and to build bridges between them to overcome mistrust and disagreements.  Any successes in this process will be fed back into the subregional Intergovernmental Authority on Development (IGAD) negotiations.  The NWP recently established a National Women’s Link for Peace which brings women together across ethnic divides to contribute to peace processes in South Sudan.  A new program, “Women Link”, brings women from different ethnic, geographic and socio-economic backgrounds together to support each other in safe spaces in tangible ways.

Reconciliation: The SSCC and NWP are committed to building sustainable peace processes, led by women leaders from different ethnic/tribal groups while incorporating a strong justice orientation.   A political settlement is a necessary first step, but reconciliation at all levels is essential. The widely respected ecumenical Church is critical to authentic reconciliation.  Church women and their allies are pursuing reconciliation between aggrieved parties and, where necessary, incorporating existing mechanisms to retain what has already begun on the ground. To foster meaningful transformation, staff and intermediaries of the NWP model reconciliation as subjects of gender-based violence themselves through their words and actions.

Approaches by SSCC-NWP in this area include, but are not limited to, addressing issues of gender-based violence with a specific focus on violence against women, advocating for the rights of girls and women, and advocating for the formal education of girls.  A newly launched “Side by Side” component of the SSCC-NWP work addresses gender norms and culture, and means to learn about the global faith movement for gender justice.