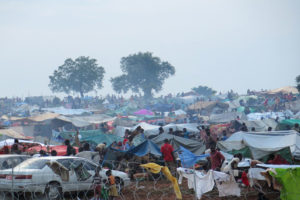 KAIROS is deeply concerned and saddened by the outbreak of violence in Juba, South Sudan, this past week. The following statement from our ecumenical partner, the South Sudan Council of Churches (SSCC), condemning the violence and calling for de-escalation and calm was broadcast in Juba on Sunday, July 10, by the Secretary General of SSCC, with the approval of church leaders.

Please join KAIROS in praying for those who have been killed and their families, and for leadership at all levels to put the country back on the road to peace.

STATEMENT OF CONCERN REGARDING INSECURITY

Yahweh puts an end to wars over the whole wide world, he breaks the bow, he snaps the spear, shields he burns in the fire. Be still and acknowledge that I am God, supreme over nations, supreme over the world. (Psalm 46: 9-10)

We, the leaders of the Church in South Sudan, are extremely disturbed about the fatal shootings which occurred in Juba on the evenings of 7th and 8th July 2016 and the morning of 10th July. We make no judgement as to how or why they occurred, nor who is to blame, but we note with concern that there have been a number of incidents recently, and that tension is increasing.

We condemn all acts of violence without exception. The time for carrying and using weapons has ended; now is the time to build a peaceful nation.

We pray for those who have been killed, and for their families, and we ask God’s forgiveness for those who have done the killing. However we also urge repentance and a firm commitment from all armed individuals, forces and communities, and from their leaders, to create an atmosphere where violence is not an option.

We are encouraged by the statements from both President Salva Kiir and First Vice President Riek Machar calling for calm. We add our voices to theirs, and urge soldiers and civilians to refrain from provocative words and actions, and to do everything in their power to avoid escalating the situation.

We also note with concern that such killings are not confined to Juba. A team from SSCC has just returned from Wau after a pastoral visit to show solidarity with the people there, and we cannot forget the recent killing of our missionary Sister Dr Veronika in Yei only two months ago, as well as many other cases which are so common that they pass almost unnoticed.

We assure you of our prayers during these difficult times, and once again call for calm and hope.

May God bless you.