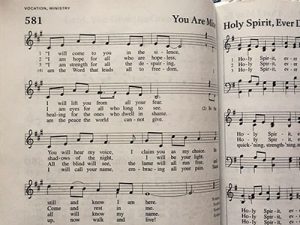 These words from Hymn #581 You Are Mine, come often to my mind as I work as a pastor, and as a member of the KAIROS network.

“I will come to you in the silence, I will lift you from all your fear.
You will hear my voice, I claim you as my choice. Be still and know I am here.

Do not be afraid, I am with you. I have called you each by name.
Come and follow me, I will bring you home; I love you and you are mine.”

These Scripture-based lyrics were intended to be heard as God’s word of comfort and assurance in times of discomfort and need. They are often sung when suffering and lament is happening, when soothing is called for.

There are indeed times and places when and where soothing is called for, and other times when comforting undermines itself. And so it is with delight and admiration that I see colleagues taking risks to work on TRC Initiatives and reconciliation in the February tax and budget season.

It is risky in this season for pastors to talk about Murdered and Missing Indigenous Women and Girls, risky to be working to get congregants to set aside Christian Church budget-money to tour a Residential School, risky to be coaxing most-beloved “people in the pew” to rethink ancestral narratives that are foundational to settler peoples. When colleagues risk in such ways it seems to me that they are letting Epiphany light shine in the darkness.

Why are these actions risky? As a pastor in this season it would be more worldly-wise to focus on how blessed the church has been and to put energy towards preserving, maintaining, trumpeting the current level of congregational comfort as well as tending griefs and losses closer to home than remind parishioners of how we the church and her leaders have been the active and passive source of pain, grief, loss.

In this post-Christendom era many clergy fear for their own jobs while paying off their Masters degrees, fear negotiating conflict if people become offended, fear congregants will withhold offerings if “the church” is flirting with non-Christian Spiritualties, fear running out of social capital on a justice issue when the building is in need of repair….

These are not simply selfish fears. Clergy have professional responsibility for consequences to the congregation: no pastor, discord in the community, underfunded services, broken down buildings, all these may lead to the loss of current and ongoing ministries both to people in the pew and in the extended community that relies on the church (refugees, the hospital and home bound, food bank users, seniors, AA groups, after-school families).

When I see clergy thoughtfully and prayerfully risking to facilitate justice, it speaks to me of the integrity they possess when asking suffering and lamenting parishioners to be comforted and emboldened by Hymn #581. “Do not be afraid” is God’s encouragement to the preacher-presider as much as to the people in the pew and beyond. Regressing to times and places that are too-safe may be worldly wise, but such action fuels fear and undermines faith-full-ness in the God who made all things “good,” the God who reminds us face to face not to be afraid.

Karen Kuhnert is a member of the KAIROS Indigenous Rights Circle. She is currently serving as Pastor to the Lutheran congregation of Faith Fergus-Elora. Karen is Archivist (Story-keeper) for the Eastern Synod of the Evangelical Lutheran Church in Canada.