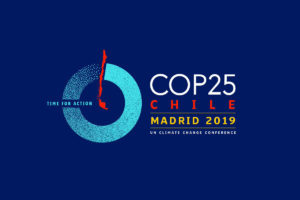 Delegates representing almost 200 nations returned to their countries of origin empty handed on key mandates despite participating in the longest ever UN climate change conference, which wrapped up in Madrid on December 15. The United Nations Framework Convention on Climate Change (UNFCC) is an international environmental treaty with the objective of achieving the “stabilization of greenhouse gas concentrations in the atmosphere at a level that would prevent dangerous anthropogenic interference with the climate system.” Each year, the UNFCCC holds a Conference of the Parties (or COP) to assess and encourage progress on greenhouse gas emission targets by countries, and to address the social, health, and environmental impacts of climate change around the world.

One of the main objectives of COP25 was to negotiate Article 6 of the 2015 Paris Agreement. Article 6 is a mechanism designed to allow international cooperation for the regulation of global carbon markets. By putting a price on emissions and allowing the trading of emissions permits, countries can cooperate in implementing their nationally determined contributions towards emissions reduction. In other words, Article 6 allows for emissions reductions to be transferred between countries. COP25 has ended with no agreement on how to regulate Article 6 due to tensions between the High Ambition Coalition and the weak rules promoted by a number of countries, including the US, Brazil and Australia.

“COP25 has been mired in the politics of low ambition that seek to serve individual agendas in a way that is totally out of step with the urgent need for collective action,” said Eliot Whittington, director of the European Corporate Leaders Group, a collection of climate-ambitious CEOs. Catherine Abreu, Executive Director of Climate Action Network Canada, also laid blame for the failure on big polluting countries, which “have been able to ruthlessly advance the fossil fuel industry’s profit agenda over our collective futures.”

COP25 was scheduled to be held in Chile, but due to political unrest, it was moved to Spain. A UN human rights report released on December 13 has accused Chilean security forces of serious human rights violations against protestors, including excessive force, torture, sexual abuse, and murder. These protests began with an outcry over the increase in public transit costs, but the movement has since become a broader critique of the rising inequalities in the country and demands for social justice. This is important to mention in the context of COP because in order for these international negotiations to stay relevant, greater effort is needed to understand how our current global systems are excluding people who are on the front lines of institutional oppression and therefore are the most heavily impacted by climate change.

For more on how Canadian civil society viewed the negotiations at COP25, please see the compilation of statements below from members and allies of Climate Action Network Canada.