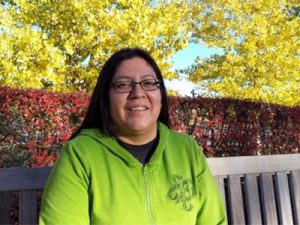 A few weeks ago I was reading about Connie Greyeyes.  The interview and accompanying Amnesty International Canada report, Out of Sight, Out of Mind, keep coming back to me whenever I think about community.

Connie, an Indigenous woman from the Bigstone Cree First Nation, lives in Fort St. John, British Columbia. She has been going to Ottawa for the October 4th national vigil for missing and murdered Indigenous women and girls for several years in addition to organizing the Sisters in Spirit vigil in Fort St. John.

At these events, she talks about knowing so many female friends, family and acquaintances who have been murdered or gone missing that she had to make a list to keep track.  As I learned more about Connie’s work I became aware that her insights were mapping, for me, critical connections between relationships, community and systemic change, and how the work of KAIROS fosters these critical connections.

Personal relationships were the impulse that got Connie involved in this advocacy work.  The death of a cousin, and of a growing number of friends, impelled her to raise her voice.

Relationships were also the catalyst for creating change.  Friends and family supported her in the work.  As Connie remarked, they found strength and resilience together.  And, more than that, it was by looking for underlying connections, within the stories and between the stories, that root causes of violence and injustice were uncovered.

For instance Connie’s account has flagged, for me, how violence against Indigenous women and girls is inextricably linked with the weakening of community through economic factors such as the huge gap between the high wages for resource sector workers (predominantly male) and the much lower wages of women in northeast British Columbia (wages that are well below the average for women in Canada).  High wages have driven up local prices even for the basics such as food and housing.  Those who do not make high wages (predominantly Indigenous women) experience food and housing insecurity.

Community is also undermined by the overwhelming presence of a transient workforce that is mostly young and male (a demographic that is statistically more likely to commit violent crime).  When people are not connected to each other through a strong sense of community, diversity and difference can easily become obstacles to relationship rather than sources of creativity and imagination.

Further, inadequate levels of access to government supports and services plagues women in northeast British Columbia.  Women’s shelters and food banks are in a constant state of crisis; both of which are signs of a weakened community and factors which further weaken community.

At another level, the stories of these Indigenous communities reveal the importance of relationship with the land, or rather how forced disconnection from land undermines community health.  Traditions of hunting, fishing and gathering are critical to cultural identity and wellbeing.  Indeed, many experience it as a source of healing.  However, the huge scale of resource development in this area has deeply impacted traditional territories, affecting wildlife, fish, land, water and Indigenous communities.

However, Connie Greyeyes has shown how the cracks in one community can begin to reveal a map for creating change both there and beyond.  To heal our relationships with Indigenous women and girls, we need to be working toward healing in our relationship with the land, water, wildlife, but also with the global economy, work, culture (especially the roots of bias and the consumer-driven distortions), and politics

KAIROS’ Women of Courage program brings women together from different human rights contexts—Indigenous, conflict, and migrant—for shared analysis, learning, strategizing and social action.  It’s rooted in and shaped by the wisdom and experience of KAIROS` long-term partnerships with domestic and international women’s organizations, networks, and movements for peace-building, human rights, and ecological justice.

The Women of Courage program also recognizes that, while women like Connie and others around the world face many injustices, women are also key catalysts and agents for change when they are able to create and exercise leadership in human rights and peacebuilding, processes that currently are often dominated by men’s voices and experiences. Women are key actors in the struggle for social justice.

We long for community because it holds sacred energies of love from which solidarity and justice flow.  Through its work with its many partners, KAIROS has been deeply involved in the work of building a movement of solidarity and justice, and promoting the important role of women in this movement-building work.  Efforts such as these make KAIROS is an inspiring example of community and a powerful catalyst for change.

Sue Wilson, CSJ is Director of the Office for Systemic Justice for the Canadian Federation of Sisters of St. Joseph.