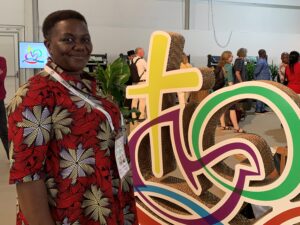 The opening prayer in the evening of the WCC assembly in Karlsruhe, under the big canopy tent outside, moved me to tears when the Greek Orthodox Bishop in his turn to pray started by saying, “I bring to you greetings from the land where the gospel was first preached by Jesus himself.”

It felt like Jesus was among us, as if He was the one preaching. I was also touched by the unity and humanity that was exhibited among people from all over the world as they gathered at the Assembly. I asked myself about the possibilities of what we could do in the world out there outside of the Assembly to exhibit the same- love, unity and humanity amongst us. Why is it different out there? What are we, as believers of the church, not doing to spread the love of Christ to reach to the ends of the world? To reach a point when everyone treats each other with love and respect? Where there are no more wars, no more occupations, no more land grabbing, no more evil deeds against each other, no more corruption?

I was however discouraged by the fact that gender balance, gender equity or gender justice – despite being agenda items and in policy – were not adequately put into practice. How could a big ecumenical body like the World Council of Churches be poor in its implementation? The WCC Central Committee was lacking in its gender parity in leadership, with the outgoing moderator, Dr. Agnes Aboum, one of few women in leadership at the WCC. One hand cannot clap. One hand is not enough. Women’s issues can only be well articulated by women, who live the experiences and are empathetic to other women’s struggles, because they are closely similar despite different contexts. This for me, was an issue of serious concern.

Unfortunately, through my interactions with other women participants at the Assembly, the gap in gender inequity in boardrooms is similar at various other Councils of Churches in different countries, despite women being well educated and possessing relevant knowledge and skills. Women are still ignored and discriminated against from participating in the highest decision-making bodies of the churches, in positions such as board of directors, chairpersons and general secretary positions. It felt more urgent to me, than ever, that it is time for gender inclusive actions in our churches and as ecumenical bodies, and not just in their preaching. We really need to change the narrative and give women well-deserved and earned equal participation.

In the book of Corinthians, we are taught that if one part of the body is suffering, all other body parts are suffering as well. I could not help but question why the WCC has largely, not adequately acted upon the pain and suffering of our countries in Africa and Asia when the Council has the capacity to do more through its members. I was however encouraged that delegates were able to review a number of WCC’s guiding principle documents and minutes on various issues and regions. The task now, is in the implementation and practice.

I trust that the WCC will be stronger enough to stand up in solidarity with the suffering of the most marginalized in various countries, and to advocate for the rights of the suffering people. The Council is capable of putting pressure on greedy and corrupt leaders, within the church and beyond, to bring peace and justice to their various countries and should also, with evidence, challenge Western countries that perpetrate war in other countries in order to exploit their natural resources.

Another thing that caught my attention during one of the Bible study sessions was the story of the man who was born blind and when he met Jesus, Jesus opened his eyes. It was said that this does not necessarily refer to physical blindness, but also to spiritual blindness and that only Jesus can open our eyes from spiritual blindness. Ironically today in that same village in current Palestine, where that miracle took place, the region continues to experience spiritual blindness; blindness to truth and blindness to justice.

I leave the Assembly with the conviction that as Christians, and people of faith, we need to offer our prayers, for the miracle of truth, justice and reconciliation, especially for those suffering multiple oppressions in the world.