Ottawa review of Temporary Foreign Workers must include migrant rights 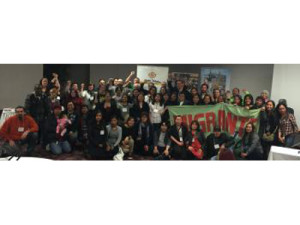 Canada announced a review of the Temporary Foreign Workers Program (TFWP) just days after the Equal in Dignity — Equal in Rights Forum in Fredericton on February 13 that was organized by KAIROS Canada, Migrante Canada, the Canadian Labour Congress-Atlantic, and the Canadian Union of Public Employees.

The timing could not have been better. The forum focused on what’s wrong with the TFWP and how to fix it.
Under the TFWP, temporary workers are often tied to specific employers, have no means to protect themselves from workplace abuse, and have no access to community support services. Those who qualify to apply for permanent residency undergo a lengthy process that separates them from their families for extended periods.

One migrant worker explained, “The four-year cap [four years in, four years out rule] is cruel and inhuman. Because of the nature of our [seasonal] work we cannot easily transition to permanent resident status and those of us who can’t are sent home after four years.

While a federal review of the TFWP is welcome, the concern is that the government will focus only on the needs of employers. KAIROS and its partners call on the federal government to ensure that migrant workers are included in the review process.
The Equal in Dignity — Equal in Rights Forum can serve as a model moving forward. The forum allowed migrant workers to build links and relationships with allies from labour, grassroots community organizations, and KAIROS’ member churches. It also allowed allies to hear first hand from workers and as a result migrant workers felt valued and supported.

“This forum gives me hope,” said one worker. “We are so glad we came. We learned there are people who support us and who do not see us as nameless and faceless migrant workers who steal jobs from Canadians.”

During the forum, workers spoke of the need to transition from temporary to permanent residency, and of the desire to be reunited with their families. They do not consider themselves any different from Canadians who contribute to the country’s economy and wellbeing, except that they are prevented from becoming permanent members of the communities where they work and live.

Many employers and community members want the migrant workers to stay in Canada.

“Our employers want us to stay because we have become assets to their business,” said one worker.

“We love our migrant workers friends. They are active members of the church and have adjusted well in the community,” said the moderator of the Shediac Bay Community Church in New Brunswick. We will do everything we can to help them stay.”

The government’s planned review is an opportunity to fix what is wrong with the TFWP, but migrant workers must be included to ensure migrant’s rights are respected.