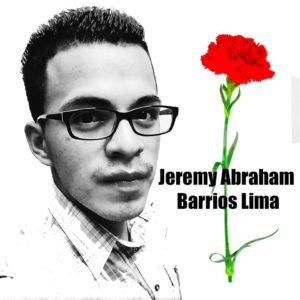 Please respond to news of this horrible crime by taking action here . Also, any donations received by the Mining Injustice Solidarity Network this week, will be sent to Jeremy’s family. Please contact: Lisa Rankin, Maritimes-Guatemala Breaking the Silence Network, btscoordinator@gmail.com.

North American organizations are dismayed and deeply troubled by the execution-style murder of 22 year-old Jeremy Abraham Barrios Lima, assistant to the director of the Guatemalan Centre for Legal, Environmental and Social Action (CALAS), on Saturday in Guatemala City.

A group of Canadian and US legal, environmental and social justice organizations, and solidarity networks publicly express their condolences for the victim’s mother and two young sisters. In addition, they are profoundly worried about the safety and continued work of CALAS and the mining-affected communities that this organization collaborates with. There is no denying the significance of this brutal murder amidst escalating violence against land and environment defenders, journalists and citizens involved in important environmental and social justice struggles in the country and the region.

Jeremy Barrios was cruelly assassinated by unknown assailants with two bullets to the head while doing errands in zone 4 of Guatemala City. He was responsible for managing sensitive information at CALAS and had not received any prior threat or warning of this attack. None of his personal belongings were stolen. His murder is understood as a direct message to CALAS’ director and other personnel. The precise motive for his murder is not yet known.

“This attack on our colleagues’ organization comes as a terrible shock and a disturbing continuation of threats and brutality against human rights and environmental defenders throughout Guatemala. CALAS’s legal director Rafael Maldonado was with us in Vancouver only two weeks ago supporting Guatemalan victims of mining-related violence. We urge a full investigation into the material and intellectual authors of this murder, as well as protection for CALAS and its personnel,” remarked Matt Eisenbrandt, Legal Director for the Canadian Centre for International Justice (CCIJ).

“We are extraordinarily worried about the safety and work of organizations like CALAS and mining-affected communities around the country. In our recent study, Guatemala is where we found the highest amount of physical violence in connection with Canadian-owned mining projects,” stated Leah Gardner for the Justice and Corporate Accountability Project (JCAP) at Osgoode Hall Law School.

The Justice and Corporate Accountability Project’s report, The ‘Canada Brand’: Violence and Canadian Mining Companies in Latin America, was released on October 24, 2016 and looked at incidents of violence and criminalization in connection with twenty-eight Canadian companies in thirteen countries in Latin America from 2000 to 2015. It found that at least 44 people have been killed during this time, 30 of which were targeted killings, while more than 400 people were injured, not including work-related injuries. They also found that over 700 people were legally persecuted during this period, including arrests and detentions, for their work in defense of their territories, livelihoods, health and environment.

“The situation for land and environment defenders in Guatemala and Latin America is progressively getting more and more dangerous. It is absolutely urgent that the Canadian government respond to the demands that 180 Latin American organizations – including CALAS –  sent in a letter to Canadian Prime Minister Trudeau over six months ago to take measures to prevent systemic harms and ensure that affected peoples and communities have access to justice for the many harms taking place,” responded Lisa Rankin for the Breaking the Silence Maritimes-Guatemala Solidarity Network.

Among other things, the letter to Prime Minister Trudeau calls for measures to ensure respect for the decisions of numerous communities, both Indigenous and non-Indigenous, who have said no to large-scale mining because of its severe and damaging impacts on the environment and social wellbeing. The letter also called for measures to ensure effective access to Canadian courts. In Guatemala alone, an estimated 1 million people have voted against mining on their lands and in their territories given the negative impacts that have been felt around Canadian held projects, such as Goldcorp’s Marlin mine and Tahoe Resources’ Escobal mine.

“In response to this deadly and devastating attack, and profound apprehension regarding ongoing militarization and threats against land and environment defenders in Guatemala, we want to reiterate our commitment to build ever greater solidarity from organizations in the U.S. and Canada to support Guatemalan partners in their essential work for healthy communities and a healthy environment,” emphasized Ellen Moore from the Progressive Leadership Alliance of Nevada (PLAN).