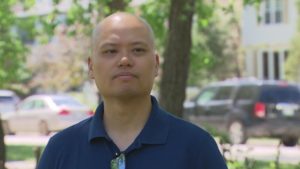 Diwa Marcelino, an organizer with Migrante Manitoba and KAIROS Steering Committee Member, says the province must step up inspections to protect temporary foreign workers in the province. (Photo: John Einarson/CBC)

Take Action! Please write to your Member of Parliament and urge the government to give all migrants in Canada immediate residence status with a pathway to permanent residency.  Learn more.

A migrant workers advocacy group is calling for more protections for temporary foreign workers after a cluster of COVID-19 cases in southern Manitoba.

“It’s unfortunate that we still can’t provide the same safety precautions to these temporary foreign workers and migrant farm workers as other workers are enjoying,” said Diwa Marcelino, an organizer with Migrante Manitoba.

Four people at a southern Manitoba workplace have now tested positive for COVID-19.

The first case at the workplace — a man in his 60s — was announced on the weekend. Three additional workers tested positive after that, said Dr. Brent Roussin, Manitoba’s chief provincial public health officer, on Wednesday.

Officials wouldn’t disclose the type of worksite, which employs 18 temporary foreign workers and six local workers. The staff had been split into cohorts of six, Roussin said, and all were tested for the virus. So far, all workers who tested positive were from the same group.

On Wednesday, Roussin said the patients are self-isolating and the risk to the general public is low.

But Marcelino said more must be done to ensure temporary foreign workers who come to this province are protected when they get here.

“That may be reassuring to the general public, that the cases are travel-related,” Marcelino said.

But if there’s transmission among the workers, “then it’s not so reassuring for the workers in that workplace.”

On Wednesday, Roussin said businesses employing temporary foreign workers are subject to stringent guidelines for hiring and follow-up, but he didn’t know specifics of how workplaces are monitored.

He’s seen “promising” developments from some employers, he said, such as clear plastic shields installed as dividers or extra trailers brought in to house workers. But he wants more government oversight to make sure workers are protected, and better communication from government on the care workers can access if they fall ill.

For example, many workers don’t know that they can access Manitoba health care if they get COVID-19, Marcelino said.

“I would like to hear more from the doctor [about] employees in the workplace … and what actions are being taken to ensure their safety,” he said.

Long-standing issues in the spotlight

The pandemic has brought long-standing concerns of advocates and workers to the forefront, Marcelino said. Conditions that workers and activists have fought to change for years, such as crowded bunkhouses and jam-packed production lines, are now potentially lethal transmission sites for COVID-19.

“The close proximity of workers in their sleeping arrangements has always been a problem for privacy, and workers have … complained about that for decades,” said Marcelino.

“The pandemic comes in, and now those same working conditions …  have created even worse problems for them.”

Advocates in Manitoba were dreading an outbreak among temporary foreign workers here, Marcelino said, after large-scale outbreaks elsewhere in the country.

A 31-year-old temporary foreign worker from Mexico who had COVID-19 died on May 31, after coming to Canada to work at a pepper farm in Windsor, Ont.

“These things are happening,” Marcelino said. “We’ve been hearing these warnings.”

Jenna Hennebry, an associate professor at Wilfrid Laurier University and co-founder of the Migrant Worker Health Expert Working Group, said it’s essential that inspections increase, and that officials involve workers in the process.

Sick workers in Canada have faced challenges accessing care, she added, so she’s calling on government to engage with workers while they’re in isolation.

“Many [workers] are hesitant and are fearful of causing any issues — don’t want to report illnesses, and they also don’t know what that’s going to mean for them in terms of their income security,” she said.

Federal rules require most temporary foreign workers arriving in Canada to quarantine for 14 days after their arrival, and employers must pay each worker for at least 30 hours per week during that period.

Lanette Siragusa, chief nursing officer for Shared Health, said Wednesday the province has worked with the Public Health Agency of Canada to stay abreast of when migrant workers enter Manitoba and confirm they have somewhere to isolate safely.

Beth Connery, a farmer at Connery’s Riverdale Farms in Portage la Prairie and the labour chair for the Canadian Horticultural Council, said she was concerned to learn a worker had tested positive for COVID-19. She also employs temporary foreign workers at her farm.

Connery said some employers have taken extra steps beyond government requirements, such as limiting capacity in shared facilities like bathrooms or kitchen to one person at a time, or offering grocery deliveries so staff don’t have to leave the site after their quarantine period.

Many of the staff at her farm arrived long before the pandemic was a significant threat in their home communities in Mexico, she added.

“The reality is, once they get through their quarantine, the only way for them to contact someone with COVID is to go out into our general public here in Canada,” Connery said.

“We don’t have the great big firms here,” she said. “I believe we have a good chance of keeping everyone safe and as healthy as we possibly can.”