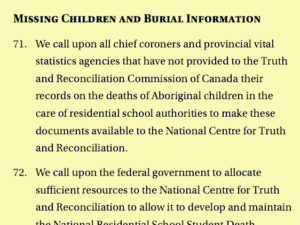 Indigenous Watchdog tracks and reports on how reconciliation is progressing in Canada across all 94 Calls to Action. With the recent discovery of a mass grave with 215 Indigenous children on the grounds of the former Kamloops Residential School located on the traditional territory of the Tk’emlúps te Secwépemc, the focus has rightfully turned to Calls to Action # 71 through 76 “Missing Children and Burial Information”.

The official government of Canada website “Delivering on Truth and Reconciliation Commission Calls to Action” was last updated on Sept. 5, 2019 – almost two years ago. Three of the Six Calls to Action dedicated exclusively to “Missing Children and Burial Information” have not even started – 6 years after the release of the TRC Summary Report in June 2015. Indigenous Watchdog has been tracking the federal government response on its website Indigenous Watchdog, as well as delivering comprehensive status updates on the actions of all stakeholders who are accountable for responding to the Calls to Action.

Maybe now, after six years of delays and decades of indifference the federal government in collaboration with other stakeholders – provincial, territory and municipal governments as well as the churches – will do what should have been done years ago: Honour the missing and undocumented Indigenous children and repatriate their remains for proper burial and remembrance. The impacted families and communities who have suffered long enough may finally find some peace and consolation.

If the federal government is truly committed to reconciliation, open and transparent communications about what they are doing is essential. Delays of two years or six years are clearly unacceptable. The three “Missing Children and Burial Information” Calls to Action that have still not yet started relate directly to:

“I call on Canadians – elders and youth, Aboriginal or not – to commit to reconciliation and breaking down the wall of indifference.”

Indigenous Watchdog is dedicated to the transformation of Indigenous lives by raising awareness and educating all Canadians through the delivery of comprehensive, high quality information on the full range of Indigenous issues with a particular focus on the Truth and Reconciliation Calls to Action.