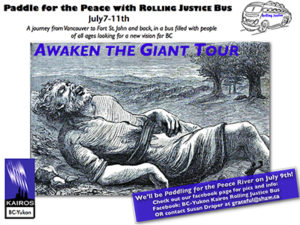 Fort St. John, BC-   On Saturday, July 9, 2016 over 45 members of the Rolling Justice Bus community will gather with thousands of other British Columbians to participate in the annual Paddle for the Peace. This diverse group of people from Vancouver Island and the lower Mainland will leave Vancouver on Thursday, July 7th and travel by bus to Fort St. John, stopping at Prince George to over-night.

For 11 years, the Peace Valley Environment Association and West Moberly First Nation have hosted Paddle For the Peace, an event that brings hundreds of people from all over BC to the Peace River to protest the Site-C dam project.  The Rolling Justice Bus community is proud to be supporting this celebration of the beautiful Peace Valley and the mighty river that sustains it.

This is a critical moment for the people who love this watershed. The BC government is already clearing land in an attempt to force the project through, even as First Nations challenges opposing the project wait for their day in court.  The Rolling Justice Bus (RJB) community is part of a national faith-based network called KAIROS: Canadian Ecumenical Justice Initiatives, an organization concerned that construction of the Site C dam will violate Indigenous peoples’ rights and exacerbate ecological damage caused by previous dams.

Accordingly, KAIROS is calling for construction on Site C dam to be suspended; that no more permits be issued for Site C dam until the Indigenous peoples, whose lands and ways of life will be affected, are able to exercise their right to free, prior and informed consent, in keeping with the UN Declaration on the Rights of Indigenous Peoples.  KAIROS is also calling for a thorough, arms-length review by the BC Utilities Commission.

Rolling Justice Bus spokesperson, Janet Gray, Regional Representative for BC-Yukon KAIROS, explains why this bus trip to the Paddle for the Peace event is important:

“We’re calling this journey to the Peace River the Awaken the Giant tour because we think that the people of BC haven’t been paying attention to what’s been happening in the northern part of our province over the past decade or so.  The rapid industrialization of the north- fracking, LNG projects, pipelines, Site C dam construction- all of these initiatives represent a way of thinking about development and resources that disconnect us from the earth and from each other.  Aboriginal and non-aboriginal communities are being divided by what government and industry are doing and the rest of BC remains silent. We think this must change. This is not just a local issue. If Site C proceeds, the financial burden it will place on BC Hydro will be shared by everyone. The people of BC are like a sleeping giant. Once awakened- once more of us better appreciate what’s happening in the north and the consequences for the entire province- the giant will rise up and use its strength and clear vision to build a new kind of economy for BC. “

There’s a provincial election next year and the need for an informed electorate has never been more critical.  This tour is part of a province-wide campaign the Rolling Justice Bus community has joined to encourage citizens to learn more about the issues raised by the construction of Site C dam. The economic solutions of the past are not what our children and grandchildren will need to take them into a truly sustainable future- a future based on respect for the web of life and healthy relationships.

It’s up to all of us to get our paddles in, and help change course. All our relations!

Members of the RJB community will be available to be interviewed throughout the tour.  Contact Susan Draper or Janet Gray at 778.679.9011 or thegrays@shaw.ca for more information.

Friday, July 8
8:15am Bus plants a “Heart Garden” at the Highway of Tears junction in Prince George, in memory of missing and murdered aboriginal women
1pm      Arrive at Camp Emile on Moberly Lake
3pm      Tour of WAC Bennett Dam with Helen Knott, member of the Prophet River First Nation, Rocky Mountain Fort camper, Treaty 8 Steward of the Land and a KAIROS Woman of Courage

Saturday, July 9
8am- 5pm Paddle for the Peace event

KAIROS is a faith-based social justice organization of eleven Canadian churches and religious organizations. It focuses on Indigenous rights, international human rights and ecological justice. We deliberate on issues of common concern, advocate for social change and join with people of faith and goodwill in action for social transformation. www.kairoscanada.org