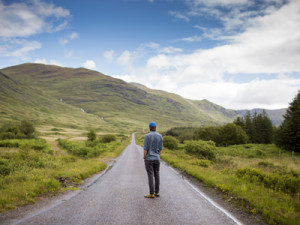 Selina Mullin-Ingles is a member of the Student Christian Movement of Canada and the United Church. She lives in Ottawa with her spouse, Zack.

Reflecting on this Sunday’s Gospel reading, Luke 13:31-35, I was struck by the image of the pilgrimaging Christ standing on the road towards Jerusalem. In this chapter of Luke, we meet Jesus in the midst of his travels, begun in Luke 9, as he is warned by a group of Pharisees about the danger he is moving towards. The Roman sponsored King, Herod, was issuing threats against Jesus, threats which most would take seriously considering his recent beheading of Jesus’ friend and colleague John the Baptist (Luke 9:7-9). Yet, this gruff roaming rabbi greets the threat of violence with this response: “Go and tell that fox for me, ‘Listen, I am casting out demons and performing cures today and tomorrow, and on the third day I finish my work.” (v. 32)

This statement tells us Jesus has no intention of halting his travels because of a threat by the governing powers, a threat of violence, a threat that has been channeled into action in the past. He emphasizes his words by assuring his listeners the work he is doing will be done today, and then the next, and the day after that—alluding, in our minds, to his greatest work demonstrating redemption in his crucifixion and resurrection. He then repeats himself, “Yet today, tomorrow, and the next day I must be on my way, because it is impossible for a prophet to be killed outside of Jerusalem.’” (v. 33)

He goes on to say, “Jerusalem, Jerusalem, the city that kills the prophets and stones those who are sent to it! How often have I desired to gather your children together as a hen gathers her brood under her wings, and you were not willing!” (v. 34) This story of Christ, journeying forward despite the great danger he is walking towards is always juxtaposed, in my mind, by the story of the Prophet Jonah. Jonah who did not want to go, who had no love for the people he was sent to, who spoke God’s words of grace but received the Ninevites’ repentance with indifference. Jonah who wanted wrath, and violence; Jonah who was controlled by fear (fleeing his mission) and exclusivity (his rejection of God’s call to extend grace to the Ninevites).

As justice seekers, in our contemporary context, I often wonder whom we are most like. Are we the angry Prophet who heads towards danger controlled by fear and seeking vengeance? Or, are we like Christ, spurred by love, which fuels courage in the face of fear; a love that renders violence powerless, and refuses to heed the threats of the “powerful”.

My constant hope, and prayer, is that I am journeying towards Jerusalem, a heart full of compassion that will not waver in the midst of violence and injustice. And yet, pilgrimaging is hard, and our small acts of justice will not always bear the fruit we want to see. Jesus’ ministry and death did not immediately change the political and social systems he was fighting against. He tells Jerusalem in Luke 13:35: “See, your house is left to you. And I tell you, you will not see me until the time comes when you say, ‘Blessed is the one who comes in the name of the Lord.’” Christ knew that hearts and minds, and destructive systems are not changed over night. Although, I like to believe he understood the righteous impatience many of us feel—bred from a sacred desire for the world to be righted.

In this Lenten season we journey as a faith community along that road to Jerusalem, walking beside Christ, reflecting on his actions. We have seen him rebuke evil in the desert already, and now we see him walking towards forces of violence and oppression in the city. As we journey with him, taking time to examine our own hearts, I would ask you to reflect on the attitude with which you are seeking justice.

May love inspire in you courage to overcome fear, to seek justice from a wellspring of compassion. Amen.

All verses quoted in the New Revised Standard Version