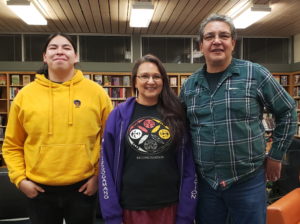 While I’ve read and heard parts of our indigenous history in Canada, reading only goes so far in understanding it. This exercise brought the events of the past to life, having individuals participate in the shared history of the indigenous people of Canada. Facilitators from KAIROS Canada shared the facts of that history, through pre-contact, colonization, resistance, and reconciliation. It began with the over 40 participants standing as the indigenous people on blankets, which symbolize the land of Turtle Island, which is known as Canada. We learned indigenous words and parts of the culture before first contact. After first contact is where the experience started to hit home. Our area of blankets began to shrink as land was taken away, participants crowding together closer. The facilitator representing the European people, shook hands of many, giving them cards that represent their fate. Some died of disease, those participants moving out of the circle to sit outside as ancestors. Our land shrank further as reserves formed, separating individual groups, some across the border in the US, others moved to new areas entirely. More people were taken off the blankets, quite a few moving to a separate residential school blanket. During all this, individuals were singled out, some dying of famine, disease, suicide, murder. Others were removed from the blankets, separate from the rest but still participating for various reasons. Some to be adopted elsewhere as with the Sixty’s Scoop or as a residential school survivor that wasn’t able to reunite with family.

Throughout this, participants read scrolls and the facilitators shared facts, stories of their culture, and their personal history and experiences. It was powerful hearing the emotional impact of the residential schools and the sixty’s scoop. Understanding how much personal and cultural history and connection was lost because of these events was disturbing. Though it’s heartbreaking that people have experienced such tragedies, knowing that despite these events, there are individuals, such as the facilitators, who are reconnecting with their culture and sharing programs like this brings hope. The exercise did eventually begin to shift towards a message of reconciliation, sharing some of the steps being taken towards healing the wounds of the past.

I was one of the participants who was asked to leave the blankets. I didn’t leave for death or adoption, I was stripped of status to be a professional such as a doctor or a lawyer. My friends were taken away for disease or famine or taken to another place or removed to residential schools. After standing with everyone, I stood outside, still participating, but not allowed to be part of it all. During the exercise, I was so busy taking in all the information, I really didn’t realize how much seeing my friends and acquaintances leave the circle for all these reasons meant. This was truly a life-changing experience. During the sharing circle after the exercise, each of us shared what we learned and what we would do with this knowledge. While my interpretation of the exercise isn’t perfect, I wanted to share my experience and encourage anyone who has the chance to take in an exercise like this to do so. It was incredibly eye-opening, bringing new perspective to a history that we all share and all need to understand.

I asked a couple of the facilitators a question at the end of the exercise.
Elder Tim Poitras, who shared much of the oral history of culture as well as his experience with residential schools, had this to say as his message to pass on:

“If there’s one thing I would pass on to people… A hope for a better tomorrow based off of our atrocities yesterday. We need to build this country together…”

KAIROS Canada facilitator, Diane Campeau, Jigaabiikwe(where the land and water meet woman), who shared her experience in the Sixties Scoop and represented the Europeans, had this to say as her message to the community:

“Just appreciate the willingness for all the participants that came tonight to learn about indigenous history. Steps forward, what they need to do, whether it’s self-reflection or community engagement. The blanket exercise isn’t to blame or cause shame, but to have a heart movement. When stories touch people’s hearts that’s when change can happen. It’s about building relationships with both indigenous and non-indigenous because we all have a story and we need to learn to respect and love one another as we’re sharing the land that we call Canada.”

Joni Hagen, Executive director of South East District, the organization that brought KAIROS Canada in for the exercise had this to say:

“Our mandate is inclusive to working with all communities and organizations in the south east. We are one of many partners that can play a role in bringing the truth and reconciliation process and calls to action to the attention of communities and continue to create relationships with Indigenous communities. As we move forward, we will explore avenues to provide awareness initiatives for members of our sport, culture and recreation network.”

Thank you to Diane Campeau, Tim Poitras, and Chris McDougall for leading the exercise.  Thank you also to everyone who came to participate.

This experience was educational, emotional, touching, and inspiring for all involved. It’s at events like this that we learn both what has happened and what we need to do to move toward a better future together.

We are all treaty people.

Originally published on DiscoverWeyburn.com on January 30, 2020, and written by Krista Klemmer