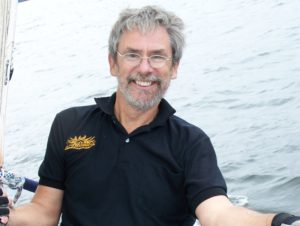 Kenn Stright has worked tirelessly for social and ecological rights for more than 40 years. A retired Presbyterian Minister, and past KAIROS Atlantic Regional Representative, Kenn is on the planning team for Streams of Justice: Atlantic Gathering 2019.

We recently asked Kenn to share his thoughts on being an activist and the important role the Atlantic region plays in advancing justice in Canada. The following has been edited for length.

What motivated you to become an activist?

I can pinpoint the day when I became passionate about Indigenous concerns. I was into the first four years of my ministry at the Presbyterian Church at Waywayseecappo First Nations Community in Manitoba (southwestern part of the province). After being there a couple of years, and I think it takes a couple of years to built trust, the Chief came by one day and said, “We’re going to go for a ride.” I asked, “Where are we going?” He said, “You’ll know when we get there.” He took me to the site of the Birtle Residential School. It had been closed nine or ten years.

We walked those halls and he started telling me stories about the Residential Schools. This was long before there was any exposure of these schools. It was 1978. What he asked me to do at the end of the day was to make sure that people never forget what happened in this place. I made him a promise I’d do that.

I shared that with my national church, which at the time did not want to listen. When I came back to Atlantic Canada from Manitoba, and shared what I learned, I was heckled for the first time ever. I was told those things had never happened, and that Residential Schools were probably the best thing that ever happened. It wasn’t very easy.

From the very beginning, it was an issue of justice. The MacKenzie Valley pipeline was also lumbering along. A number of things just seemed to coalesce. How on earth could you ever minister to a people and not get involved in what are the most passionate issues?

How much is Atlantic Canada a driving force with some of these issues?

The Marshal case probably sparked the Burnt Church initiative, which was based on the fact that Indigenous people have a right to a food harvest. When the government tried to stop that, activists from all over Atlantic Canada ended up at Burnt Church to stand between the First Nations people and the RCMP. I think you would find a ripple effect across the country.

We’re not a written Treaty people. There has never been any ceding of lands. The original documents are about making our journey together. Indigenous people continuously remind us that they have never ever said that this is not still their land. We’re a Peace and Friendship Treaty here.

How has the situation changed since you began?

Almost everything in the big picture can go back to the Royal Commission on Aboriginal Peoples. It brought awareness at the national level that Indigenous peoples had literally been abused, specifically their natural rights and claims. Every time a case involving Indigenous peoples has been brought to court, without exception, Indigenous peoples’ rights have been upheld by the courts. It was a precursor to the Truth and Reconciliation Commission of Canada (TRC).

I was one of the volunteers at the TRC in Halifax. I saw the hundreds, maybe thousands of people who came, who two decades earlier would never have thought to go to the TRC hearings. We sent a delegation of about 20 to Sipekne’katik to the TRC hearings held in the First Nations community. That just would not have happened in the 80s when I was heckled.

However, every time I say that, I am still disappointed in how far we have to go. If you asked me when I left Waywayseecappo, would we be where we are today, I would be quite disappointed that we haven’t made more progress.

Is there an example of personal activism that succeeded?

I’ve been involved in Parliamentary bills, but if I were looking for a success, I would look at the work of gkisedtanamoogk and Margaret Tusz-King. Fifteen years ago, they initiated a program to prepare non Indigenous people to go to local pow wows to celebrate, have fun and feast with First Nations communities. I was their student.

They worked with people who were terrified to enter a First Nations community because they did not know what to expect. I think it was a major breakthrough.

Almost everywhere I went as an educationa coordinator, I’d encourage church people to drop in at the local friendship centre, which exists almost everywhere in this country. And they were absolutely terrified to do so. They didn’t know what reception they would get. They heard so many stereotypical stories of Indigenous people back in those days.

Today, there are people who can’t wait for the next pow wow or go to friendship centres. I have one woman who has now led 30 or 40 KAIROS Blanket Exercises who prior to that had not met personally with an Indigenous person. It is the face-to-face encounters that have made all the difference.

The Parliamentary bills mean a lot and I think there’s also a national initiative that says that we have to rectify this problem and it is a problem as long as the Indian Act is in place. To get people to just talk to one another is from my perspective essential work.

How has activism changed?

There are new voices in the conversation. The most powerful of those voices is the Indigenous community. At one point I would suggest that the church may have wanted to be the voice for Indigenous people, maybe in some ways to make amends for the Residential Schools. In interviews for the Royal Commission, church representatives were non-Indigenous and male. That wouldn’t happen today.

I think we realized that we didn’t need to be the voice of Indigenous peoples, we just needed to stand beside the people to ensure that their voices were heard.

Where do you think activism is going?

Treaty and healing works both ways. The people who are in the best position to lead us to the full meaning of what Treaty is and help us toward healing are probably Indigenous people.

The conversation has been stilted. The TRC heard stories of pain and suffering. There is another story that needs to be told. How are we working together? Maybe it’s the Wampum Trail all over again. I think settler Canada needs to hear this, and I’m not sure we are there yet. We’re still living with the same prejudices. Thunder Bay is still a murder ground for Indigenous people. The Highway of Tears did not go away because somebody said there is a commission on Missing and Murdered Indigenous Women and Girls. That is an everyday reality in this country and that’s got to be addressed. We have a long way to go.

What would be your advice to a young activist?

I would say that you need to give your life to something. Whatever you give your life to you should give it with a passion. I think we all need to count for something in this life. Probably the age they are now is the time to create such a passion. There are so many things that will change this world, especially when you look at environmental, gender and Indigenous rights issues. I love the idea that there are five streams at the Atlantic Gathering to help facilitate these passions.

Streams of Justice: Atlantic Canada Gathering runs from May 2-5 at Mount Allison University in Sackville, NB on the ancestral and unceded territory of the Mi’kmaq. Group rates available. Register by April 15. Learn more and register: kairoscanada.org/atlanticgathering