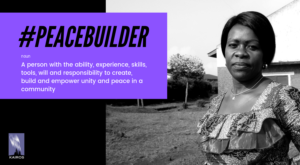 KAIROS urges the Government of Canada to use the upcoming Women Deliver Conference in Vancouver as an opportunity to make a very important announcement: increased funding to grassroots women peace builders.

The global conference on women’s equality, well-being and rights will be held June 2-6. It takes place every three years and brings together government and NGO representatives.

Attending the conference are Rachel Warden, KAIROS’ Partnership Manager and Nene Neema Lubala from the DRC’s Heritiers de la Justice, a partner in the Women of Courage: Women, Peace and Security program.

They will highlight the critical work of KAIROS partners. Ample evidence shows that women-led grassroots organizations are critical to development, including laying the foundation for sustainable and inclusive peace. Yet, these organizations remain seriously underfunded. KAIROS continues to call on the government to increase Official Development Assistance and to implement policies and mechanism that allow for long-term, stable and predictable funding to grassroots women-led organizations.

The KAIROS network helped build political will for this call through a petition and on-line letter writing campaign launched in January. The petition urged the government to fund and implement its Feminist International Assistance Policy, focusing support on grassroots women’s organizations, and to increase its international assistance from the current 0.26 percent of gross national income to 0.7percent, the international standard.  The campaign included an incremental and predictable timetable for this increase, specifically 15 percent to the International Assistance budget over 10 years.

Close to 500 people signed the petition and 400 people sent letters to their Members of Parliament.

“Thank you to everyone who signed the petition and participated in the on-line letter campaign,” says Warden. “We believe that this support is having an impact.”

KAIROS representatives met with several MPs about the petition, a number of whom expressed support for the ask. MP Hélène Laverdière (Laurier–Sainte-Marie) tabled and read the petition in the House of Common on February 20, which can be viewed here:

MP Laverdière received a response from the government on April 8. The government reiterates its commitment to the Feminist International Assistance Policy and refers to budget commitments that were made in 2018.

KAIROS commends the government on this policy. It has been calling for an increase in funding for this policy, specifically for women peace builders, since it was created. Unfortunately, this was not reflected in the 2019 budget.

In KAIROS’ response to the 2019 budget, it is noted that  the budget includes marginally more funding for international assistance by 2023-2024 and the possibility and hope of more commitments to come at the Women Deliver conference in early June.  Yet this falls significantly short of the money required to fund and implement the Feminist International Assistance Policy, and to increase international assistance from the current 0.26 percent of gross national income towards the universal standard of 0.7 percent.

In its response the government acknowledges that it is not simply about the amount of funding for Official Development Assistance, but about the “quality and effectiveness of this assistance” and  reaching “the poorest and most vulnerable.” KAIROS could not be more in agreement.  Yet, it is unclear how “quality” will be achieved without appropriate funding.