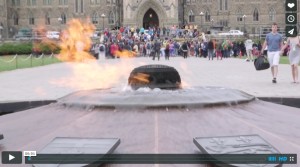 Message from the Executive Director:

That was the moment when I believed that things will be different.

Hundreds of us, with dynamic young Indigenous people taking the lead, telling us the truth about colonization. A powerful moment of public witness, on the eve of the release of Truth and Reconciliation Commission’s Calls to Action.

The Blanket Exercise is KAIROS’ most popular teaching tool. It was created to animate the Report of the Royal Commission on Aboriginal Peoples.  A wise and profound report that has been largely ignored.

Now, almost 20 years later, we were awaiting another report, with a renewed road map for a transformed country.

But it felt different.

Has anything changed?  In some ways nothing. The inequality in health, in education. The risk of violence. Racism and displacement from land. It all continues.

But maybe we are different…

Building on the strength of those who have fought long and hard for Indigenous rights, there’s a growing movement across this country, young and old – Indigenous and non Indigenous people who will not let this go .

Who will hold on to the truth, to the 94 Calls to Action, to the hope of a transformed future, until we begin to see the Elders’ visions made real.

There can be no going back from the truth shared by the survivors.

To honour their courage, we must show steadfast hope and resolute persistence.  Faithfulness. Until we see the full realization of the rights of Indigenous peoples. Until we have a country that clearly honours the contributions of First Nation, Inuit and Métis peoples.

This Thanksgiving, when we give thanks to the Creator for the beauty, and bounty of the land, let’s show deep respect and gratitude to the original peoples of this land.

Let’s translate that gratitude into a commitment to tell the truth, to work to repair the injustice and live renewed, in right relationship with the Creator, each other, and with all of creation.