Just transformation needed now: KAIROS responds to the 2020 Speech from the Throne 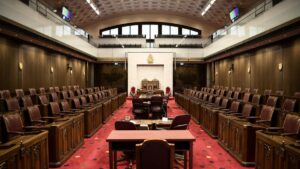 The Government of Canada addressed the pandemic – “our generation’s crossroad” – and how it plans to “build back better” in the much-anticipated Speech from the Throne on September 23. The speech touched on racism, gender and income inequality, the environmental crisis, dislocation, and the struggles facing Indigenous and global communities.

While the government addressed each issue separately, they intersect and are amplified by a pandemic that exacerbates human rights and environmental abuses that are engendered by systemic forces such as white settler colonialism, capitalism and patriarchy. KAIROS urges the federal government to develop a recovery plan that delivers a just, decolonial, anti-racist, and feminist transformation for all people and the planet.

COVID-19 has brought to the fore the hardships experienced by foreign migrant workers who are on the frontlines of the pandemic working in agriculture, food processing and caregiving, contributing to the economy and keeping Canadians fed, protected and cared for during this dangerous time.

In the Throne Speech, the government states: “when people choose Canada, help build Canada, and make sacrifices in support of Canada, we should make it easier for them to formally become Canadian.”

This sentiment aligns with appeals to grant permanent residence to foreign migrant workers currently in Canada, especially those who have fallen through bureaucratic cracks and are now undocumented and, in future, to provide permanent status upon arrival to all migrant workers.

Permanent status will ensure migrant workers have access to healthcare, family unity, labour rights and other social programs. KAIROS calls on the Canadian government to prioritize permanent residency for all migrant workers.

The 2020 Speech from the Throne also acknowledged that the pandemic’s impact on Indigenous people in Canada, and especially Indigenous women, is greater.

The speech emphasized that long-standing challenges such as a lack of primary care, proper housing and potable water have been exacerbated by the pandemic. In response the federal government promised to work with First Nations, Métis and Inuit organizations on Indigenous health legislation and a mental health and wellbeing strategy, accelerate a 10-year commitment to close the infrastructure gap, invest more in its commitment to supply clean water to First Nations, address food insecurity and strengthen food supply chains.

The 2019 Throne Speech’s promise to introduce legislation to implement the UN Declaration on the Rights of Indigenous Peoples (UNDRIP) before the end of 2020 was repeated in this year’s speech.

In response to criticism for not delivering an action plan on the crisis of missing and murdered Indigenous women and girls in June, and in light of extensive lobbying by Indigenous women’s organizations, the government promised to accelerate its work on this issue, and to address systemic racism and police violence by promising to reform the police force.

However, the vision for a better built Canada presented in the Throne Speech suggests a continued tolerance and dependence on an extractive sector with a long record of business-related human rights violations.

On gender justice and corporate accountability

The Final Report of the National Inquiry into Missing and Murdered Indigenous Women and Girls leaves no doubt that the extractive sector is a leading factor in the gender-based violence experienced by Indigenous women residing near and/or working in that field. As Indigenous and Afro-descendant women across Turtle Island and the planet reiterate with evidence, Canada-based extractive companies typically disregard the rights—inclusive of free, prior, and informed consent—of Indigenous communities living near extractive projects. These companies have also been accused of contributing to violence against land and water protectors who are defending the planet from climate distress.

In addition to introducing UNDRIP legislation this fall, and working with Indigenous communities to address challenges related to healthcare, food sovereignty, clean water and improved infrastructure in Canada,  KAIROS urges the Government of Canada to put in place concrete measures to ensure that the extractive sector upholds human rights—within and beyond the borders of Canada. To that end, the government must grant the Canadian Ombudsperson for Responsible Business Enterprise the tools to investigate allegations of business-related human rights and environmental abuses committed abroad. The Government of Canada must also enact legislation requiring that companies—including subsidiaries and supply chains—undergo mandatory human rights due diligence.

KAIROS urges the federal government to adopt the guidelines and recommendations of reports such as Voices at Risk: Canada’s Guidelines on Supporting Human Rights Defenders, Raising her Voice: Confronting the Unique Challenges Facing Women Human Rights Defenders, and others advocating for the rights and well-being of Indigenous and Afro-descendant women human rights defenders throughout the world.

Corporate accountability is also key in the federal government’s bid to mine resources in support of clean tech development to reduce our reliance on carbon-based energy. Technology is neither clean nor green if it is dependent on mining that that causes human rights violations and environmental devastation.

KAIROS is encouraged that the government made the climate crisis a priority in the Throne Speech and welcomes its recommitment to exceed its 2030 climate goal and legislate net-zero by 2050. While the government made these promises during the 2019 election, little has been done since then. Canada’s climate action plan, prior to the Throne Speech, was described as “insufficient” and compliant with 3.0°C of warming by Climate Action Tracker in Cologne, Germany.

Analysis of Canada’s fair share contribution towards preventing global warming above 1.5°C shows that Canada should reduce emissions by 60 percent from 2005 levels by 2030 and contribute an additional 80 percent in global carbon reduction through climate financing to low-income countries. KAIROS urges the federal government to commit to its fair share.

KAIROS is concerned that the Throne Speech did not include commitments to climate financing and funding for loss and damages in the Global South. KAIROS has called on the federal government to fund a dedicated grants-based Women’s Fund for Climate Adaptation and support an integrated, feminist global approach to the climate crisis.

Putting a price on pollution is an effective policy to achieve greenhouse gas emissions reductions and KAIROS supports the government in its delivery of this policy. However, KAIROS is concerned with the federal government’s investment in and reliance on liquefied natural gas (LNG) as a transitional fuel as the global economy moves away from coal. KAIROS calls for no new oil and gas development projects, including pipelines for transporting bitumen and LNG, fracking wells, and terminals to export LNG.

KAIROS also welcomes the government’s commitments to a just transition – to support job creation in the net-zero economy, to build resilience in Canadian communities, and to invest in zero-emissions vehicles and infrastructure. Any infrastructure investments must uphold Indigenous rights, a reminder of the urgent need for UNDRIP legislation.

The creation of a new Canada Water Agency is essential to address the threats to Canada’s fresh water. KAIROS supports the development of an agency that will incorporate Indigenous knowledge alongside western science and governance and uphold Indigenous peoples’ rights to clean and safe water.

KAIROS also welcomes the government’s commitment to modernize Canada’s Environmental Protection Act and recommends that a modernized Act include the right to a healthy environment to protect the health of people living in Canada, promote equality, and redress environmental racism.

On international cooperation and women, peace and security

Canada’s relations with and commitment to the rest of the world and international cooperation come at the very end the Throne Speech, in a single paragraph under ‘Canada and the World’.

Although the mention is brief, KAIROS welcomes the pledge to “invest more in international development while supporting developing countries on their economic recoveries and resilience.”

Canada’s response to the pandemic must be global. It must include funding for partners in the Global South to respond to the devastating impacts of COVID19 and address increased vulnerabilities and inequalities. Canada must address the immediate humanitarian crisis and “support work to ensure that people around the world have access to a vaccine,” as promised in the Throne Speech.

But, at the same time, Canada must honour its commitment to a long term, sustainable, feminist and human rights-based approach to international development as outlined in the Feminist International Assistance Policy (FIAP). This includes prioritizing support for local women’s rights and peacebuilding organizations in recovery and transformation. An increase in funding for a response to and recovery from the pandemic in developing countries cannot be seen as one off; rather, it must contribute to raising Canada’s official development assistance from the current 0.26 percent closer to the 0.7 percent global standard.

October 2020 marks the 20th anniversary of UNSCR 1325, a call to support women, peace and security measures. Two decades after its adoption, gendered gaps in peace processes are still wide and deep, and the costs of inequality for women and girls, and for economies at large, are too high. Sustainable women’s empowerment is an essential means to realise sustainable development. Peace and security cannot be achieved without gender equality.

Globally, militaristic responses to the crisis have exacerbated violence, particularly against marginalized groups and human rights and land defenders. In addition to gender-based and domestic violence, the pandemic has also led to increases in armed conflict in some areas. In Colombia, the Philippines and Brazil, physical attacks and killings of land and water defenders, particularly women, continue unabated and seemingly with impunity. Canada’s response must include political and financial support to the work of local women peacebuilders and human rights defenders in their efforts to address the needs of their communities.

KAIROS urges the federal government to invest in a future that promotes the integrity of our planet and enables people’s access to basic human rights and the dignity of all peoples. KAIROS endorses the Principles for a Just Recovery and has joined an informal alliance of more than 300 national and local civil society groups to demand that recovery plans move us toward a more equitable and resilient future for all.